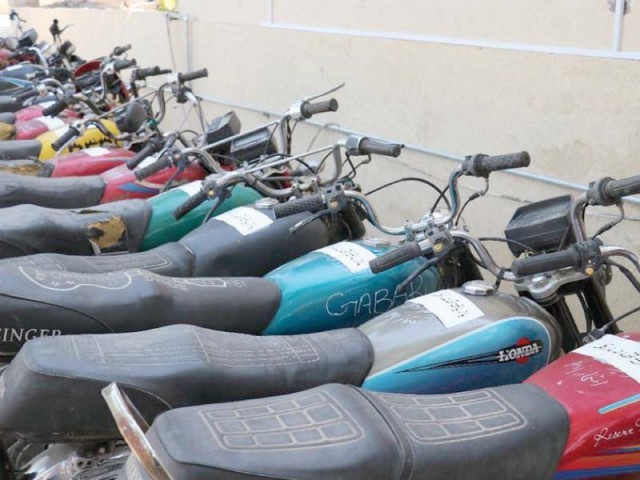 Though police authorities have repeatedly claimed to have eliminated organised vehicle theft in the city, according to the reports the crime figures are not coming down. Considering these figures only represent the reported cases, the actual number of cases might still be higher as there are frequent occasions where cases are not registered at all or are registered very late.

Since January: Over 50 cars, bikes stolen in capital

Traditionally, the weekly bazaar at H-9 has remained a hot spot for auto theft incidents in the Industrial area police jurisdiction. Due to this reason, in February this year, the police announced a QR code-based solution, to take preventive measures and secure the parking lot at H-9 bazaar and other areas but the initiative was not fully implemented.

According to a visitor of the H-9 Sunday bazaar, previously the police implemented a strategy in which they would issue a ticket to every driver entering, which they would check at the exit, to ensure the security of the vehicle, but now this method has been discontinued.

Industrial Area SHO Fayaz Ranjha said the high incidences of theft in his area were possibly due to activities of some gangs in the area. “Sometimes gang members come out of jail and end up resuming criminal activities in the same areas as before.”

The officer said there was no specific area the vehicle thefts were being reported from; rather the registered cases came from various localities.

He claimed H-9 bazaar parking was fully secure and only the vehicles and bikes parked outside the designated parking area were lifted by auto thieves.

There is also a specialised anti-car lifting cell (ACLC) working with the capital police with the sole objective to prevent auto theft. Police alleges that the cell bust five gangs of car thieves and recovered 34 stolen
vehicles in February and March this year.

Judging by the police claims, dozens of gangs have been busted since 2016 but the menace is still wide spread, with the number of vehicles stolen consistently surpassing the number of those recovered and caseload piling up.

The multi-billion Safe City Project with surveillance cameras installed across Islamabad has also not made any visible difference to reducing the risk of auto theft.

Police say most of the cars stolen from Islamabad and Rawalpindi are taken to Khyber Pakhtunkhwa, at times to Punjab and Azad Jammu and Kashmir as well, where some are tampered with and some are disassembled so the perpetrator can sell their spare parts for profit.