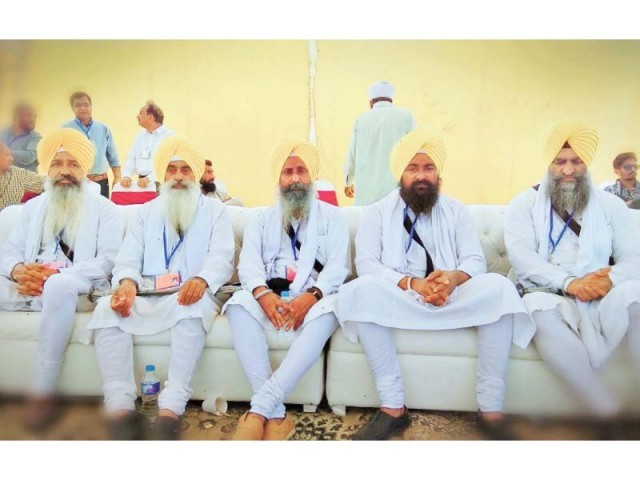 LAHORE: Wearing five embelms of Khalsa and dressed in the traditional Sikh outfit of Panj Pyare, five Sikh men, reached Wagah station along with 1,500 Other pilgrims to celebrate Baisakhi Festival.

The Panj Pyare (five beloved), during their stay in Pakistan, will baptise the Sikh immigrants while also aiding the conversion of those interested in their religion.

The Panj Pyare could be identified distinctly by their appearance. Wearing similar clothes, the group of Panj Pyare was headed by leader Karam Singh. The panj pyare belong to Amritsar and these ‘five beloved’ are part of every group which comes to Pakistan to perform religious rituals.

The other four Panj Pyare members are Gurman Jeet Singh, Amar Jeet Singh, Joga Singh and Sukh Jeet Singh.  While speaking to Express News, Sardar Karam Singh said he and his companions followed the directives of their ‘Guru’ and rendered their existences in the service and promotion of Sikh religion.

“The Panj Pyare in Sikh religion were the five people baptised by Guru Gobind Singh on April April 14, 1699, at the historic divan Anandpur Sahib.” 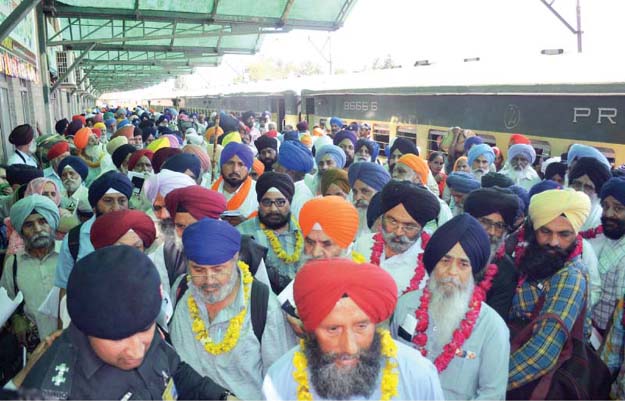 He said they will baptise only those who want to become true devotees of the Guru and Sikhism. This will mean that they have attained a special status in Sikhism. They will follow the teachings of Sikh religion throughout their lives, he pointed out. Similarly, if people from other religions want to convert to Sikhism, the Panj Payre will also baptise them.

The government made foolproof security arrangements and arranged immigration, customs, bank and medical camp facilities at Wagah Railway Station to facilitate the pilgrims.

While speaking on the occasion, Sikh pilgrim group leaders Sardar Gurmeet Singh and Sardar Charan Singh said that they would remember the warm welcome by Pakistan government and expressed satisfaction over the arrangements.

Later, the Sikh pilgrims left for Punja Sahib Hassanabdal to celebrate Baisakhi celebrations. They would stay there for three days and perform religious rituals. They will also visit Janam Asthan, Nankana Sahab, on April 15 and the next day they will visit Sucha Souda Farooqabad and perform their rituals. They will also visit Gurdwara Rohri Sahib Aimonabad and Kartarpur Narowal on April 17. The pilgrims will visit Gurdwara Dera Sahib in Lahore on April 18 and will return to India by April 21.