Offici­al says that more than half of the track work as alread­y been comple­ted
By Our Correspondent
Published: April 11, 2018
Tweet Email 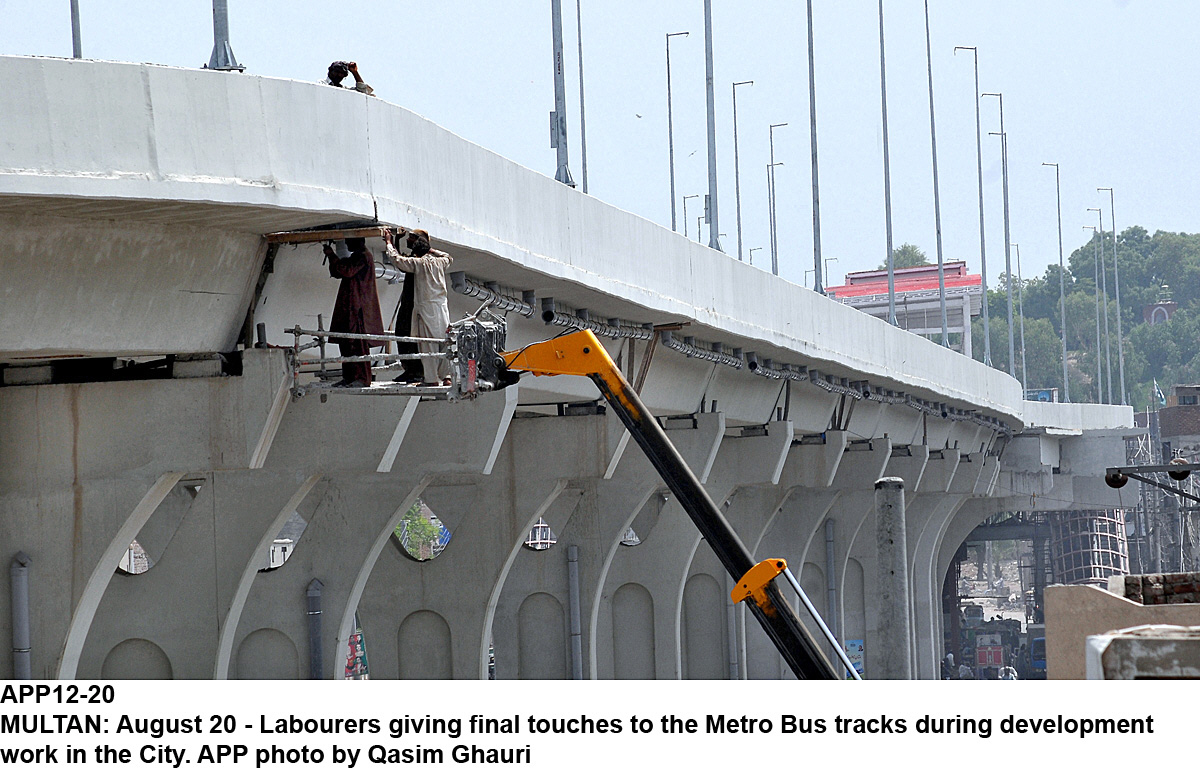 Official says that more than half of the track work as already been completed. PHOTO: APP

LAHORE: The last three bogeys for the Orange Line Metro Train (OLMT) reached Lahore on Wednesday, concluding import of all 27 bogeys to the metropolis.

Advisor to Chief Minister Punjab and the OLMT steering committee chairman Khawaja Ahmad Hassaan said that out of 27 train sets, 14 train sets have been parked at metro train depot at Dera Gujjran while the remaining are at metro stabling yard in Ali Town.

Speaking to media after the weekly progress meeting, he said that work is underway to lay a rail track and install electrical and mechanical equipment.

Chinese contractors ‘CR-NORINCO’ have employed additional workforce for early completion and partial trial run of the project, he added.

Hassaan further said that the Parks and Horticulture Authority (PHA) has been tasked for designing ornamental lightening system for illumination of the track as per international standards.

The train will be operated with electricity and construction of an electric sub-station near University of Engineering and Technology (UET) at Grand Trunk Road which has been completed for this purpose, he added.

The official said the Lahore Electricity Supply Company (LESCO) has already completed development of the sub-station, assuring to make it functional as and when required.

He highlighted that first four metro stations from Dera Gujjaran to Mehmood Booti will be completed during the current week while the target has been set for completing Pakistan Mint Station and Nichelson Road stations by the conclusion of next week.

More than half of the track work at has already been completed, Hassaan said.

The participants of the meeting were told that so far, 86.41 per cent civil work on the project has been completed. Progress of work on package-I (from Dera Gujjaran, Grand Trunk Road to Chauburji) has reached 91.27 per cent, 81.05 per cent on package-II (from Chauburji to Ali Town) , 87.10 per cent on Depot near Dera Gujran and 88.20 per cent on Stabling Yard near Ali Town.

Progress on electrical and mechanical work on the project is around 53.92 per cent.

Hassaan said that he had directed for completing, rehabilitation and reconstruction of roads, affected by the ongoing civil work, by the conclusion of this month to end the inconvenience to the general public as well as local traders.

He urged the relevant departments to finalise shifting of utility services for this purpose before the carpeting of roads.