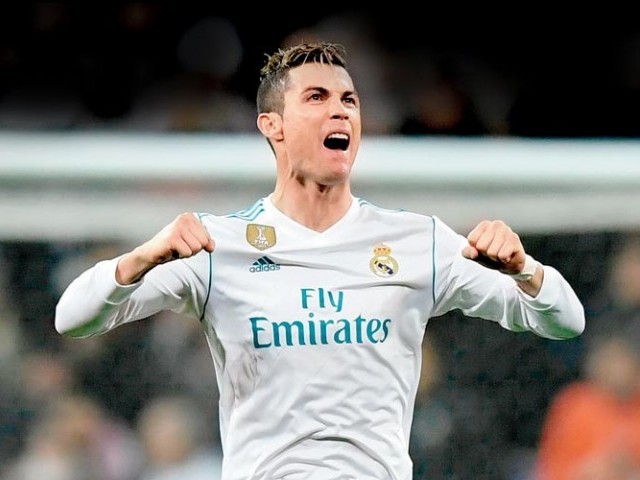 MADRID: Cristiano Ronaldo has already broken one record in this year’s Champions League but against Juventus in their quarter-final return on Wednesday he can edge closer to beating a bigger milestone of his own.

But the Portugese also now stands just three goals short of his best ever tally in a single European campaign, an achievement that would suggest this Ronaldo, aged 33, may even be the finest version yet.

His 14 goals so far have come over nine matches and featured doubles against APOEL, Borussia Dortmund, Paris Saint-Germain and Juventus.

It means this is Ronaldo’s third most prolific Champions League showing to date already and, with Real almost certain to reach the semi-finals, he is unlikely to finish here.

“Cristiano is Cristiano, it’s always been like that,” coach Zinedine Zidane said after Ronaldo opened the scoring against Atletico Madrid on Sunday.

“There’s no other player in the team that scores like he does.”

There is no doubt Ronaldo’s game is now more streamlined and therefore more geared towards goals than perhaps it has ever been before.

To preserve his fitness and energy, he accepts less touches and covers less ground. The touches he takes and the spaces he finds are aimed at creating the greatest chance of hitting the net.

Even Zidane’s system is suited to accommodating this predatorial Ronaldo, a 4-4-2, with Karim Benzema playing the supporting role and wingers, instructed to supply deliveries into the box.

When Ronaldo volleyed in from eight yards against Atletico, it was a simple cross to the back post from Gareth Bale that provided it.

In this mould, Ronaldo could be terrorising goalkeepers for a fair few years yet.

Zidane withdrew his star player in the 64th minute last weekend, despite the match being delicately poised at 1-1 after Antoine Griezmann’s equaliser.

The draw keeps Atletico four points clear of Real, and favourites for second place in La Liga, but Ronaldo going off early in a Madrid derby, without any protest, is a measure of how the Champions League is now all-encompassing for Los Blancos.

“He is intelligent,” Zidane said about Ronaldo’s substitution. “There are moments where he does not play and others where he does. He needs it, he knows that and he is better every day.”

Luka Modric and Karim Benzema were also left out of the starting line-up at the Santiago Bernabeu while Bale played 90 minutes, an indicator the Welshman is set for another European snub in midweek.

Bale’s first choice is still to regain favour under Zidane and then stay at Real this summer but his coach is showing little sign of softening. Zidane made three substitutions last week in Turin but Bale remained rooted to the bench.

If Real score one, which they have not failed to do in 24 Champions League games, Juve will need four.

“We do not cry to each other and we go to Madrid with the desire to have a good race. In football and in life you never know,” Juve defender Giorgio Chiellini said after a 4-2 win at Benevento on Saturday.

“The game is long and therefore we will need some balance but to do it will also take a pinch of healthy madness from everyone.”

Welbeck motivated by competition within Arsenal