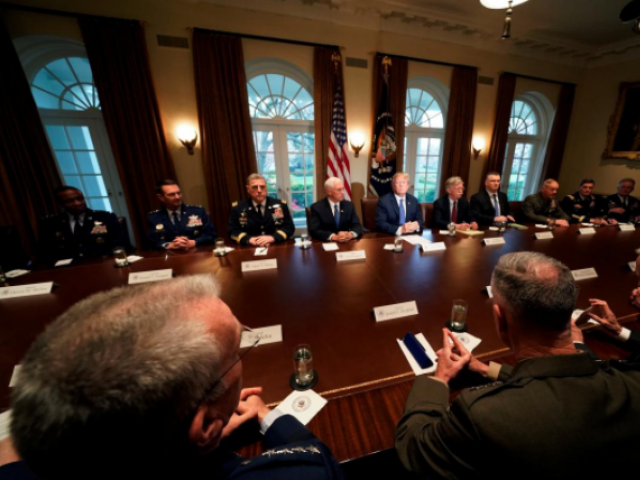 US President Donald Trump receives a briefing from senior military leadership at the Cabinet room of the White House in Washington. PHOTO: REUTERS

WASHINGTON DC: The United States is weighing a multinational military response to the suspected Syrian poison gas attack, US officials told Reuters on Monday, as experts listed several key facilities that could be viable targets.

US President Donald Trump promised forceful action on Monday, saying a decision would be made soon following the suspected chemical weapons attack late on Saturday in the Syrian city of Douma that killed at least 60 people and injured more than 1,000 others.

US officials who spoke on condition of anonymity did not disclose any plans, but acknowledged military options were being developed. The White House, Pentagon and State Department declined to comment on specific options or whether military action was likely.

Experts on Syria’s war cited France and perhaps even Britain and Middle East allies as potential partners in any US military operation, which would aim to discourage future chemical weapons use in Syria’s brutal civil war.President Emmanuel Macron warned in February that France would strike Syria if it broke treaties prohibiting chemical weapons. France has more than a dozen warplanes in the Middle East and could look to strike from the sea.

British UN Ambassador Karen Pierce told reporters that Britain “would prefer to start with a proper investigation” but that all options were on the table and London was in close contact with its US and French allies.

US intelligence officials said they believed a chemical attack did take place but that Washington was still gathering information. Trump said he was getting clarity about who precisely was responsible for the attack, but did not elaborate.

Experts speculated that the retaliatory strikes, should they happen, would likely focus on facilities linked to past reports of Syrian chemical weapons attacks.

They cited potential strikes against bases including Dumayr air base, which is home to Syrian Mi-8 helicopters and has been linked in social media to the strike in Douma.

One US official, speaking on condition of anonymity, was unaware of any decision to go ahead with a strike, but said any plans for a possible attack could focus on targets associated with Syria’s chemical weapons program while seeking to avoid anything that could spread poisonous fallout in civilian areas.

A more provocative strike could target Humaymim Airfield in northwest Syria, which was singled out by the White House in a March 4 statement that identified it as the starting point for bombing missions by Russian military aircraft in Damascus and Eastern Ghouta.

“It depends on how serious they are,” said Hassan Hassan, a senior fellow at the Tahrir Institute for Middle East Policy.

The United States fired missiles at the Shayrat air base a year ago in response to the killing of dozens of civilians in a sarin gas attack in an opposition-held town.

The United States warned Russia prior to the strikes themselves, seeking to avoid killing Russian forces. The base quickly resumed flights and the strikes did little long-term damage to Syria’s broader military campaign, thanks largely to robust Iranian and Russian support.

In recent weeks, however, Trump, along with his top advisers, have stressed Russia’s complicity in Assad’s actions. Trump on Sunday specifically criticized Russian President Vladimir Putin for backing Assad, whom he called an “animal.”

Russian UN Ambassador Vassily Nebenzia said on Monday that Moscow had warned the United States of grave repercussions if it carried out an attack against Syrian government forces.

Jennifer Cafarella, at the Institute for the Study of War think tank in Washington, cautioned that Washington needed to be ready for retaliation, particularly if the US strikes imposed military costs to Iran or Russia.

“The US needs to contemplate whether Assad, and/or the Russians and the Iranians will escalate against deployed US forces in Syria in retaliation,” Cafarella said.

She said Syria might have tipped its hand as to how it would respond to a limited US strike earlier on Monday, when Syrian air defense systems shot down five out of eight missiles fired from suspected Israeli warplanes.

They did not shoot down the attacking aircraft.

At the time, there was social media reporting that the strike was being carried out by the US military, which the Pentagon denied.

“I think that tells you something about what the rules of engagement were at the time,” Cafarella said.