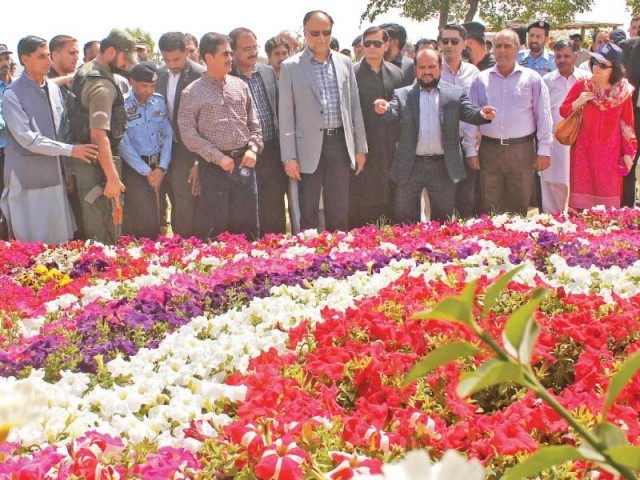 The festival organised by the Islamabad Capital Territory Administration was inaugurated during a ceremony filled with energy and excitement. The event was attended by Interior Minister Ahsan Iqbal at Lake View Park on Saturday morning. The festival was originally planned to be a three-day long event but all festivities scheduled for Friday were cut out to show solidarity with Kashmiris.

The minister said the aim behind the festival was to provide entertainment opportunities to the public and an occasion to display Pakistani culture and cuisine to the world. He further added that the intention was to make this an annual event in Islamabad. Furthermore, the event would in the long run attract foreign tourists and present a soft image of the country. “Islamabad is among the most beautiful cities of the world and is one of a few capitals made with intention. It is also among the most picturesque in terms of greenery, design, and landscape,” the minister said.

Iqbal also highlighted a number of infrastructure and development projects for the capital that the government had approved, including a Rs2.3 billion project to install a water treatment plant for Korang and Rawal Lake. He said the Council of Common Interest had also approved quota for Islamabad from the Tarbela dam and work on the construction of a pipeline would begin soon. 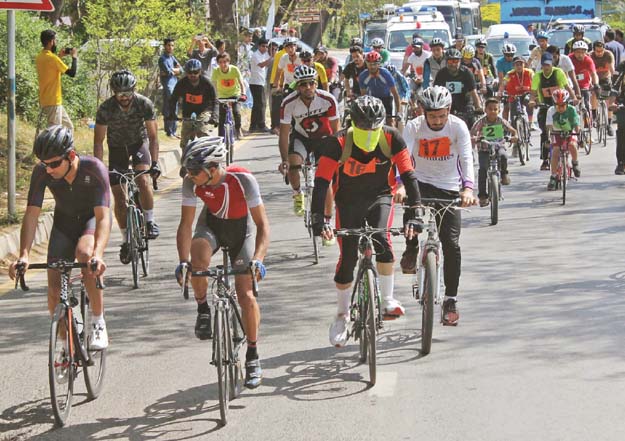 Cyclists race to the finish line during the ICT spring festival. PHOTO: ONLINE

“The Expressway from Faizabad to Rawat will be expanded and the metro bus transport system is to be started on the route,” the minister said, adding that budgetary allocations had been made for the feeder bus service in the capital. He said a law to establish food authority had also been finalised in the capital to ensure quality of food provided to the public. While a separate wing for parks and agriculture is also expected to be set up for beautification and greenery along roads and markets.

The minister said the festival would be a major event in the capital’s calendar in coming years. He also urged the residents, especially the youth, to take part in a tree plantation drive on the Margallas scheduled for Sunday as part of the festival as a part of a local duty to keep the city and hills green.

Furthermore, among the festivities scheduled for Saturday were an uphill cycling competition, daylong food and family festival, flower and pet show, Water Sports, Mushaira, as well as a marathon race and a cricket match for special children.

On Sunday, the line of events includes a vintage car and bike show, tree plantation drive, as well as a Sufi concert featuring Rahat Fateh Ali Khan and Abida Perveen. A special feature of the festival is the victory parade of Islamabad United, the reigning champions of the Pakistan Super League, from D-Chowk to F-9 Park on Sunday at 4pm. The parade will be open to the public.

The Eighteen Senior Director Marketing Uzair Adil flanked Ahsan Iqbal at the inauguration of the festival at Lake View Park. Senior officials of the ICT and people from all walks of life were also present on the occasion.

The Eighteen, a complete mix of used upscale real estate development, is a platinum partner of Islamabad Spring Festival 2018.