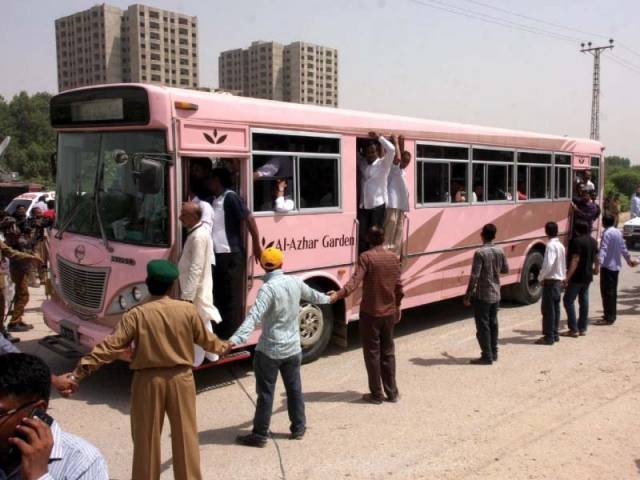 KARACHI: Five death row convicts allegedly belonging to an Islamic State-inspired militant group can appeal to the Supreme Court (SC) against their conviction and sentences awarded by the military court in the Safoora Goth carnage and Sabeen Mahmud’s murder cases.

This was contended by Additional Prosecutor-General Iqbal Awan before a two-judge bench of the Sindh High Court hearing appeals filed by five convicts, including Saad Aziz and others, challenging their conviction and sentences awarded by the military court.

While defending the prosecution’s case, Awan argued that the appellants had committed heinous crimes and were accordingly tried and convicted by the military court. He argued that the convicts’ appeals were not maintainable for hearing before the high court and pleaded to the court to dismiss it for having no grounds for hearing and passing any order.

A two-judge bench, headed by Justice Muhammad Iqbal Kalhoro, adjourned the hearing till May 7 to hear counter arguments from defence lawyer Hashmat Habib on this legal point.

A military court had awarded capital punishments in one of the cases to Saad Aziz alias Tin Tin, Tahir Hussain Minhas alias Sain, Asadur Rehman alias Malik, Mohammad Azhar Ishrat alias Majid and Hanif Nazir on May 12, 2016. An Islamic State-inspired group of youths had shot dead 45 members of the Ismaili community on the outskirts of Karachi in May, 2015.

The remaining convicts, Aziz, Minhas, Ishrat, Rehman and Nazir, had filed appeals against the sentences awarded to them by the military court.

Filing the appeals, Advocate Habib had argued that the appellants were tried before the military court, which was set up in Malir Cantonment under the Pakistan Army Act, as part of the National Action Plan.

The appellants were kept at the central prison where they were provided an appeal format to be filed before the Registrar of the Court of Appeals, Judge Advocate-General of the General Headquarters, said Advocate Habib.

He informed the judges that on August 15, 2016, the appellants were told that their appeals had been rejected on July 25. They filed their appeals in the Lahore High Court, which on October 3, also turned them down on grounds of maintainability since the offence was committed and the trial was conducted within the jurisdiction of the Sindh High Court.

Advocate Habib argued that the conviction judgment passed by the military court was not maintainable in the eyes of the law as the petitioners should not have been in the custody of the military authorities and tried under the Army Act or the Protection of Pakistan Act, 2014, which now stands expired.

He contended that the petitioners were illegally tried and that too in the absence of any counsel, which was a violation of Article 10 of the Constitution, as they were not able to communicate during their trial and investigation. On these grounds, their conviction is liable to be set aside, he added.

The lawyer claimed that the petitioners’ right to a fair trial under Article 10-A of the Constitution was violated and that the apex court had also maintained in a case that an accused cannot be denied meeting their family under Note 7 that was added to Section 73 of the Pakistan Army Act.

‘System of justice and fairness pivotal for a developed nation’