Imran Khan says the scheme is a brazen attemp­t to save crimin­als
By News Desk
Published: April 6, 2018
Tweet Email 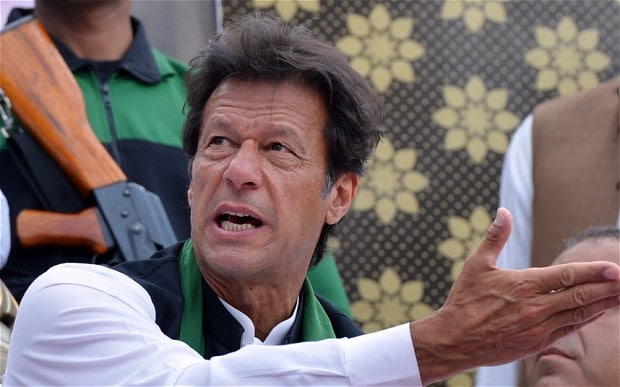 The party chief Imran Khan termed the amnesty scheme a brazen attempt by Prime Minister Abbasi to save criminals.

“Why would PM seek to do this just 45 days before government term ends? And why just two weeks before budget? This is a tax on honest people – a slap on the face of honest taxpayers,” Imran said in is tweet on Twitter.

PTI rejects yet another amnesty scheme which is one more brazen attempt by Abbasi to save criminals. Why would PM seek to do this just 45 days before govt term ends? & why just 2 weeks before budget? This is a tax on honest people – a slap on the face of honest taxpayers.

He further said that the questionable intent of the scheme was reflected in the confusion deliberately caused by PM Abbasi verbally referring to the scheme not being applicable to “politically exposed persons” while the document being circulated refers to “holders of public office and public servants”.

The questionable intent of this scheme is also reflected in the confusion delib caused by Abbasi verbally referring to the scheme not being applicable to "politically exposed persons" while the doc being circulated refers to "holders of public office and public servants". https://t.co/HzesbXLBVB

Imran alleged that if the circulating document was correct former prime minister Nawaz Sharif, former finance minister Ishaq Dar and former president Asif Ali Zardari will be off the hook and will be able to take advantage of this scheme to benefit tax evaders, asset concealers and money launderers.

If the circulating doc is correct then NS & family, Dar & family, Zardari & family – all of them can take advantage of this scheme to benefit tax evaders, asset concealers and money launderers. https://t.co/5oEuz26Kgv

Separately, addressing the media in Hyderabad Imran made it clear that the amnesty scheme was promoting corruption.

‘Imran should shun politics of accusation’

While highlighting his visit to interior Sindh, he said, “People of Sindh have finally realised that the Pakistan Peoples Party slogan is a hoax and they will not let the party make a fool out of them.

“The whole chain of command in Sindh government is corrupt,” he stated adding that Sindh was lacking behind in every aspect.

He lambasted Zardari for destroying every institution in Sindh. “Everybody in power is just making money for their families,” Imran said.

Speaking about Kashmir, Imran expressed his anger over the treatment of civilians and blamed Narendra Modi for all the violence.

“Whatever is happening in Kashmir is because of Modi and his policy against Muslims,” he said. “This policy can be viewed in India and even Kashmir now.”

Speaking at a political gathering, Imran condemned the policies of Pakistan Peoples Party (PPP) co-chairman Asif Ali Zardari. “The people of Sindh must defeat this oppressive, blood-sucking regime led by Zardari,” he said.

Referring to Zardari’s sister and PPP leader Faryal Talpur, the former cricketer said the people of Sindh were afraid of her. “They threaten, murder and lodge fake cases against those who revolt against their bidding.”

Urging masses to rise against corruption, Imran remarked that the women will have to lead the change. He encouraged women to become members of PTI and work as polling agents in the upcoming elections to combat rigging. “Sometimes God provides you with an opportunity to change your destiny, I think Sindh is ready for revolution.”

Ask Asad: Should I quit everything and go back to Pakistan?