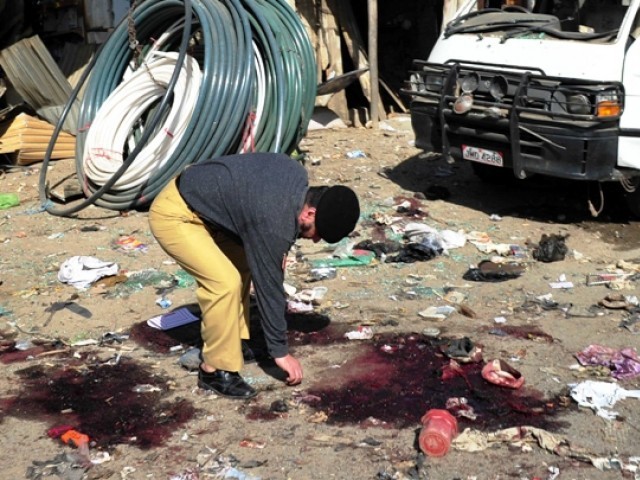 A policeman collects evidence at the site of a suicide and bomb attack outside the main training center of Frontier Constabulary (FC) in Shabqadar town, about 30 kilometres north of Peshawar. PHOTO: AFP

The death toll from the Charsadda suicide attack rose to 89 on Saturday, police said.

“There are five civilians among the dead and four other bodies which had been torn into pieces could not be identified yet,” Marwat said.

The Taliban claimed their first major attack to avenge Osama bin Laden’s death, killing 82 people and 140 others in twin suicide bombings on the biggest Frontier Constabulary training centre in the northwest on Friday.

The deadliest attacks this year occurred within moments at around 6:00 am when newly-trained paramilitary cadets, dressed in civilian clothes, were getting into buses for a 10-day leave after completing their six months training at the facility, witnesses and officials said.

The training facility is near the main Shabqadar bazaar and had the attack occurred later in the day the casualty figure would have been much higher.

A motorcycle rider first blew himself up near the gate, after which a bomber on foot detonated explosives amid panicked recruits running for safety. Frontier Constabulary (FC) Commandant Akbar Hoti confirmed the attacks.

“When FC personnel came to their colleagues’ rescue, the second bomber came on another motorcycle and blew himself up,” said police chief of the Charsadda district, Nisar Khan Marwat.

“This was the first revenge for Osama’s martyrdom. Wait for bigger attacks in Pakistan and Afghanistan,” Taliban spokesperson Ihsanullah Ihsan told AFP by telephone from an undisclosed location.

Gul Momin, his leg in plaster, recalled the horror when the explosions turned a festive Friday morning into a bloodbath.

“We had been very happy,” he added. “I was loading my bag into the bus when the blast took place. I was seriously injured but wasn’t knocked out. I crawled towards a safe place and then heard another huge blast.

“Everybody was lying on the ground and crying. I saw people lying in blood and dying. There were dead bodies and body parts. I can’t put it into words.”

Witnesses and security officials said the first bomber hit from the northern side of the facility and when people started running towards the south, another bomber detonated his explosives.

Mohammad Zubair, a witness told The Express Tribune that he had come to the bazaar to purchase something for breakfast. “I started running after the first blast,” he said, adding that he had returned to help the injured, but in the meantime another blast occurred.

The site was a gruesome mess with pools of blood, caps, shoes and other remains littered around. At least a dozen coaches and around 17 shops were destroyed in this attack.

FC personnel Imtiaz said: “It was a scary scene and there were bodies scattered around as the injured cried for help.”

Doctors at the Lady Reading Hospital (LRH) said they were struggling to save the lives of people, mostly critically wounded paramilitary policemen, and had declared a state of emergency to cope with the scale of the casualties. Earlier in the day, LRH Chief Executive Officer (CEO) Dr Abdul Hamid Afridi said 40 people were in critical condition, but by night hospital staff said that only one person was in a serious condition.

Bashir Ahmed Bilour, senior minister for Khyber-Pakhtunkhwa, said it was the deadliest attack in the country since July 9, 2010, when bombers killed 140 people in Mohmand. “Eighty people, including 69 security personnel and 11 civilians were killed and 140 others injured,” he said.

“All those who died were Muslim Pakhtuns,” he said, adding that “if they want to fight Americans, why don’t they go to Afghanistan instead of killing our youth in such a ruthless manner,” a visibly agitated Bilour told journalists.

Chief Minister Khyber-Pakhtunkhwa Ameer Haider Khan Hoti told journalists that 818 recruits had completed their training and were being sent in batches of 15. “The casualty figure was not as high as it could have been given the large number of people in the area due to security precautions,” Hoti said.

Bakht Jamal of the Bomb Disposal Unit (BDU) said the attackers were carrying about 18 kilogrammes of explosives and steel pellets and mortar shells used to increase the intensity of the blast. He said one of the bomber’s skin had been recovered.

The Taliban last week threatened to attack security forces to avenge Bin Laden’s killing. This was most deadly attack on security forces in the country during the ongoing insurgency. The attack occurred before the political and military leadership of the country was about to meet for a closed-door session of the parliament in the aftermath of Osama bin Laden’s killing in Abbottabad on May 2 in US Navy SEALs raid.

The US on Friday condemned the attack terming it “heinous”, and said that it shows the need to defeat Al-Qaeda. “This is a heinous attack,” State Department spokesman Mark Toner said of the double suicide bombing. “It only highlights the existential threat that these kind of extremist organizations pose for Pakistan, and underscores why it’s so important that we continue to work together both on defeating and dismantling al Qaeda as well as its affiliates.”