Sindh govt ridicu­led for trying to manage varsit­ies when it failed to manage primar­y educat­ion
By Our Correspondent
Published: April 6, 2018
Tweet Email 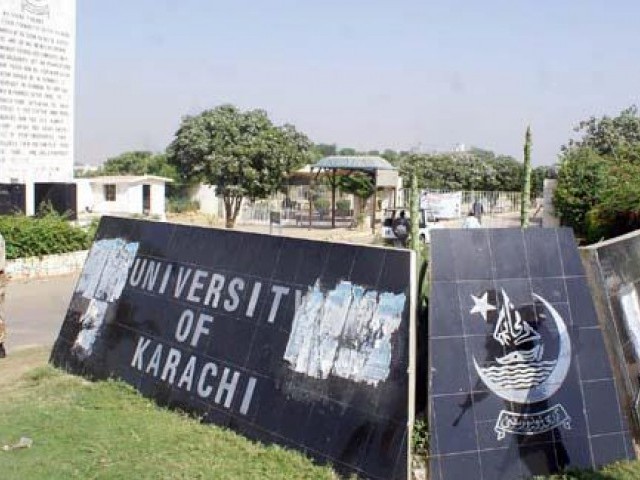 KARACHI: The bureaucracy has long been on the quest to bringing universities under its control, for which it has adopted different tactics.

Former University of Karachi (KU) vice-chancellor (VC) Prof Dr Zafar Saeed Saify said this while presiding over a seminar at KU on Thursday. The event was organised to discuss the Sindh Universities Laws (Amendment) Bill, 2018 and autonomy of universities.

“According to Quaid-i-Azam, education holds the utmost priority for any country but it is unfortunate that our system of education depicts a state of misery,” Dr Saify said.

The amendment bill has been passed by the Sindh Assembly but it has yet to be approved by the governor. Since it was passed the bill has triggered protests from varsity teachers, students, academics and civil society, who have been calling it an attempt to deprive the varsities of their autonomy.

Former president of Karachi University Teachers Society (KUTS) and Federation of All Pakistan Universities Academic Staff Association General Secretary Dr Shakil Farooqi alleged that the bill was passed with a mala fide intent to forcefully take control of higher education institutions, their resources and admission policies. “Universities are deemed as autonomous institutions as per the Constitution of Pakistan,” he said, adding that in order to preserve their autonomy, apolitical VCs were appointed in the past.

Dr Farooqi feared that making varsities accountable before the provincial government would deprive them of their autonomy and would severely affect the educational and intellectual acumen of society.

“On one hand, they [Pakistan Peoples Party leaders] are chanting slogans in favour of the reinstatement of student unions, while on the other hand, the government has kept students out of syndicates, reflecting its double policies,” he decried. The desire to reinstate student unions was felt only when political parties feared a military coup, he remarked.

KUTS Vice-President and Joint Action Committee Convener Prof Dr Shah Aliul Qader said that the campaign against the new bill would continue until the restoration of the 1972 Act, according to which, varsities were to be treated as autonomous bodies. “The syndicate should also have representation of students and teachers,” he said, demanding that student unions be restored at varsities.

“We are ready to defend our rights,” said legal expert Advocate Saifuddin. He maintained that the amendment bill was only meant to forcefully take control of the varsities, which reflected a feudalist mindset.

“Educational standards of the universities will come down to the deplorable standards we have in public schools of Sindh,” the lawyer lamented.

Dr Tauseef Ahmed Khan, former chairperson of Federal Urdu University of Arts, Science and Technology’s mass communication department, termed educational liberty a foundation stone for democracy. “Universities are different from schools and colleges as they provide space for independent research and education. This is why universities are responsible for developing leadership for society,” he said, claiming that the struggle to achieve educational freedom has a long history in Pakistan.

Academia to observe strike in govt universities across Sindh from today

“Those who are not competent enough to ensure cleanliness in the city surely cannot manage affairs of higher education,” said Prof Dr Fayyaz. He claimed that all academics were on the same page to oppose the new legislation. If enacted, the bill would crush merit at universities, he said.

Human Rights Commission of Pakistan (HRCP) representative Khizer Hayat said the authorities would not be allowed to deprive universities of their liberties in the name of provincial autonomy. “Leading universities of the world have the freedom to regulate their academic and financial affairs and this is the reason they enjoy top rankings,” he said. The HRCP representative questioned how the provincial government could improve the educational system of universities when it had failed to improve the educational system of its primary schools.

Sindh Professors and Lecturers Association Vice-President Prof Ali Murtaza was of the view that higher education could not be promoted without the autonomy of universities. “The amendment bill is extremely perilous for higher education,” he said.

Fishing communities protest against occupation of their land