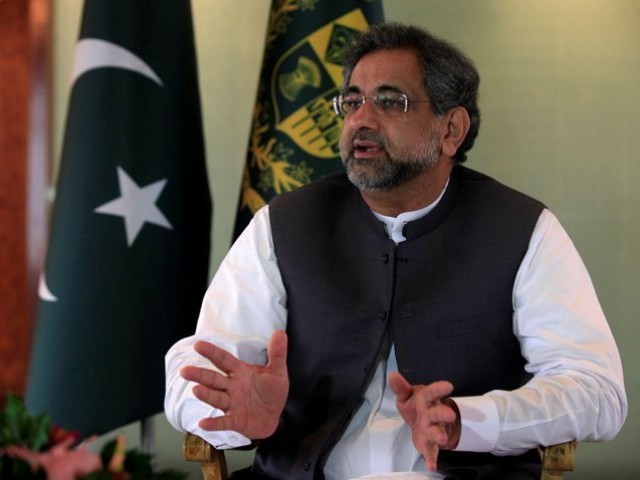 ISLAMABAD: Prime Minister Shahid Khaqan Abbasi has opened a three-month window for wealthy Pakistanis to whiten their hidden local and foreign assets at nominal rates from two per cent to five per cent .

PM Abbasi on Thursday announced five-point ‘radical economic reforms package’ with an aim to increase existing narrow tax base of only 1.2 million individuals to 30 million.

However, the much-anticipated amnesty scheme lacks punitive measures for those who do not avail the scheme and keep their assets hidden.

The scheme shall be available to all citizens of Pakistan except politically exposed persons and their dependents and it will be implemented through a presidential ordinance.

The PM also abolished the Federal Board of Revenue (FBR)-determined property valuation rates with effect from July. He offered people to declare their hidden real estate assets by paying only 1% penalty.

People will have the choice to register their properties at their own choice rates but the government will have the right to acquire the property by paying 100% above the declared value, if it thinks the person has undervalued the property.

The PM announced the package almost a month before Pakistan has to submit an action plan in Financial Action Task Force (FATF) to prove that it complies with anti-money laundering and anti-terrorism financing global regimes. The scheme has the potential to undermine the action plan, according to independent analysts.

“It has been decided to implement a radical tax reforms package and a one-time tax amnesty scheme is also part of this,” said PM Abbasi while addressing his maiden press conference at the PM’s Office. “This is an executive privilege that I have exercised today,” he added.

According to package, hidden offshore assets can be repatriated at only 2%. If the asset holder prefers to keep the asset abroad, they will have to pay 5%. Local assets can be declared at 5%.

“The government will issue the presidential ordinance before Sunday and take its approval from the cabinet through circulation,” said Dr Miftah Ismail, the adviser to the PM on Finance after the press conference.

“The decision of the federal government to announce an amnesty scheme for whitening black money is condemned and will be opposed in the parliament. Such schemes are a license for big business to commit illegal acts and then get the opportunity of legalising their ill-gotten wealth,” Rabbani said.

The PM announced a three-fold increase in the income tax exemption threshold to Rs1.2 million. He also cut the highest income tax rate of 35% to only 15%. This will provide Rs100 billion relief to the salaried class, according to the FBR.

Just a couple of hours before the announcement of the scheme, the National Assembly Standing Committee on Finance unanimously passed a resolution demanding that no amnesty be offered without first being brought before parliament for approval.

“This amnesty scheme is different from the past as this time the purpose is not to generate revenues but increase the tax base,” said the PM.

Abbasi said there are people in Pakistan who twice perform Umrah every year but do not pay a penny in taxes.  Those who do not avail the scheme and remain outside the net despite owning assets will receive tax notices from July.

When asked why no punitive measure was announced, he said it will be up to the parliament whether it determines any punishment for those who still prefer to stay outside the tax net.

“Every computerised national identity card (CNIC) holder will be eligible for the scheme and currently there are 120 million CNIC holders. However, primarily the scheme is targeting offshore asset holders and realty sector players,” he said.

To a question, Abbasi insisted that the government has legal and constitutional authority to introduce any legislation till the end of its term. He said it will be up to the next government whether it owns this scheme or not.

Non-filers to be penalised further in upcoming budget

“But I am sure that no political party would oppose increasing the tax base,” he, adding there should be at least 30 million taxpayers in Pakistan as against only 1.261 million. “The scheme will only be available up to June 30. Thereafter, strict penalties shall be imposed on defaulters,” he added.

The scheme provides for foreign exchange repatriation on 2% payment of tax and offers two options for repatriation. The foreign asset holders can invest in five-year bonds at the rate of 3% per annum. But they cannot encash the bond before one year and all encashment will be in Pakistan rupee at the prevailing interbank dollar rate.

The foreign currency account holders in Pakistan who have purchased dollars through undeclared money can also regularise them on 2% payment. The scheme also allows declaration of Foreign Fixed Assets on 3% payment at market price but in no case is less than the cost of acquisition. The foreign liquid assets including cash, securities and bonds held abroad may be declared at 5% payment.

All dollars remittances less than $100,000 per year will continue without any questions asked about the source and enjoy tax exemptions. But the foreign remittances greater than 100,000 annually will be subject to the FBR’s scrutiny.

The PM said the Pakistanis can also regularise all their undeclared incomes earned before June 30, 2017 on all local assets including gold, bonds, property on a payment of only 5%. He said the FBR rate on property would be abolished and provinces will be requested to also abolish Deputy Collector rates

The non-filers of income tax returns will not be allowed to purchase property of over Rs4 million value. The government lowered all advance Income tax rates on realty sector to only 1%.

However, the federal government will have the power to buy individual properties anywhere in Pakistan within six months of registration for 100% more for properties registered in the fiscal year 2018-19.

The PM said those who have made assets by means of money laundering, drug smuggling and terror financing will not be eligible for the scheme.