Says Americ­ans should not have to choose betwee­n their princi­ple and their payche­ck
By News Desk
Published: April 5, 2018
Tweet Email 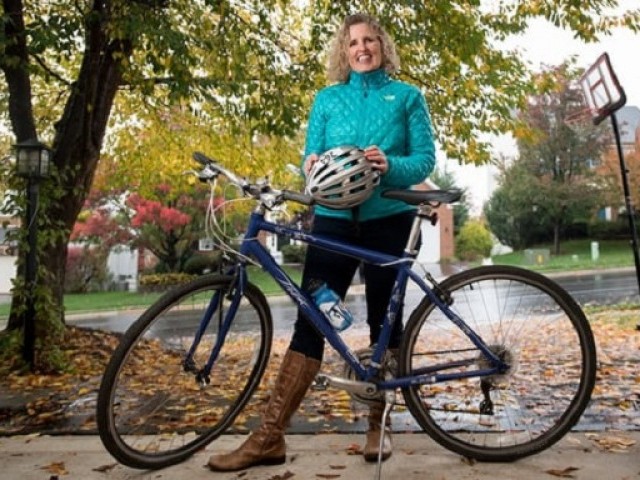 A woman cyclist who was fired from her job after making an obscene gesture at US President Donald Trump on October 28, 2017 has sued her former employer for firing her, Voice of America reported.

The Virginia State cyclist, Juli Briskman, who made the rude gesture with her middle finger as the presidential motorcade drove past her decided to file a lawsuit against her former employer Akima, the government contracting firm that dismissed her, stating the company violated the State’s employment law when it forced her to quit.

“I filed this lawsuit against my former employer today because I believe that Americans should not have to choose between their principle and their paycheck,” Briskman said in a statement released on Wednesday.

Briskman was riding her bicycle in Northern Virginia on her day off at the weekend when Trump’s convoy drove by her. A photo that went viral shows her raising the middle finger of her left hand in defiance. It has not been confirmed if President Trump saw her.

Voice of America said their White House correspondent Steve Herman, was riding in the motorcade. He was one of the first to post the image on social media, where it went viral. Briskman posted the image on her Facebook page.

Briskman’s job was terminated a few days later by the building firm who carry out work for the federal government.

The Voice of America article stated, “the company said that though Briskman’s face was not seen in the photo, she had violated its policy against so-called lewd or obscene social media postings.”

In her statement, Briskman said, “Working for a company that does business with the federal government should provide you with greater opportunities, but it should never limit your ability to criticise that government in your private time.”

Briskman’s legal team of Maria Simon and Rebecca Geller argue her lawsuit is based on the freedom of speech protection in the US Constitution and Virginia State law saying that, “Akima’s actions — forcing Briskman to resign out of fear of unlawful retaliation by the government — violated the basic tenets of Virginia employment law.”

“Briskman chose in her private time and in her capacity as a private citizen to express her disapproval of President Trump by extending her middle finger,” attorney Simon said.

This article first appeared on Voice of America.