A govern­ment lab in Al Uyayna is leadin­g the countr­y's effort­s for solar power as it seeks to divers­ify
By AFP
Published: April 3, 2018
Tweet Email 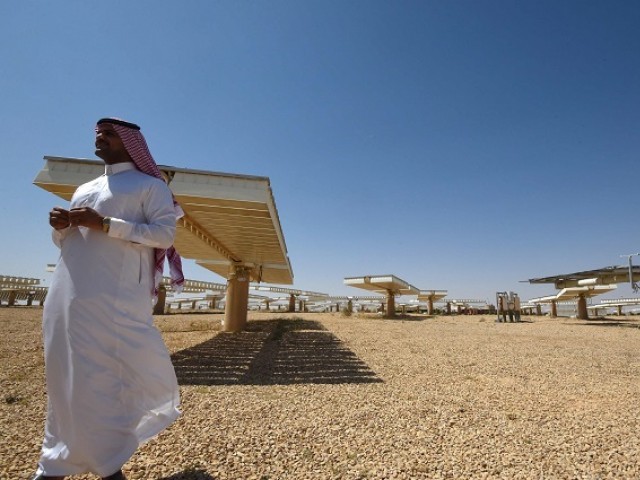 A Saudi man stands at a solar plant in Uyayna, north of Riyadh, on March 29, 2018. On March 27, Saudi announced a deal with Japan's SoftBank to build the world's biggest solar plant. PHOTO:AFP

AL UYAYNA: Saudi engineers whip up a simulated sandstorm to test a solar panel’s durability at a research lab, the heart of the oil-rich kingdom’s multi-billion dollar quest to be a renewable energy powerhouse.

The world’s top exporter of crude seems an unlikely champion of clean energy, but the government lab in Al Uyayna, a sun-drenched village near Riyadh, is leading the country’s efforts for solar power as it seeks to diversify.

The memorandum of understanding to produce up to 200 gigawatts of power by 2030 – about 100 times the capacity of the current biggest projects – was the latest jaw-dropping statement as the Saudis look to wean themselves off oil.

If built on one site, the solar farm would cover an area twice the size of Hong Kong, according to a Bloomberg News calculation.

While the scale of the plan has stirred some disbelief – the agreement announced in the US was greeted with determination at the laboratory.

“We can do it,” said Adel al-Sheheween, director of the solar laboratory under the King Abdulaziz City for Science and Technology.

“This may take time, but we have all the raw materials – sunshine, land and most importantly, the will,” he added, giving AFP a tour of the facility widely known as Solar Village.

Engineers were working away testing solar panels under harsh conditions.

A miniature sandstorm inside a cylindrical chamber battered one panel. A machine with what appeared to be a large boxing glove punched another.

The site, which also includes a solar field that supplies electricity to neighbouring villages, was established some three decades ago.
But the push for renewables only now appears to be gaining momentum.

It is driven by a key incentive – to free up more oil reserves for export, the kingdom’s chief revenue earner.

Saudi Arabia currently draws on oil and natural gas to both meet its own fast-growing power demand and desalinate its water, consuming an estimated 3.4 million barrels of oil daily.

That number is expected to rise to 8.3 million barrels in 10 years, according to the King Abdullah City for Atomic and Renewable Energy, eating up the bulk of Saudi Arabia’s crude production.

“Saudi Arabia has long had a vision for becoming… an exporter of oil and of gigawatts of power,” Ellen Wald, a scholar at pro-Saudi think tank Arabia Foundation and author of the book “Saudi Inc”, told AFP.

“That vision requires solar power installations of a massive scale. My understanding is the project will be rolled out in pieces and not as one giant plant.”

But the sheer scope of the project, which aims to produce well above the kingdom’s own projected requirement of 120 gigawatts by 2032, has prompted scepticism.

“Although Saudi Arabia has more than enough vacant, non-arable desert land… (it) really does not need so much solar power,” said Bart Lucarelli, a managing director for power and utilities at advisory firm AWR Lloyd.

“There has been speculation about whether this amount of new solar capacity can even be built in that time frame within a single country.

The consensus view is that the 200 gigawatt figure is excessive.”
Lucarelli said Saudi Arabia instead “needs a balance” between renewables and fossil fuels – and pointed out that the solar memorandum is non-binding for now.

To handle the amount of power the project envisions, experts say the kingdom would require huge investments to upgrade its grid and set up large-scale battery storage facilities.

The solar push appears to be driven by geopolitics as much as economics.

Saudi prince says Israel has ‘right’ to its land

“Saudia Arabia’s problem is that (rivals) Iran and Qatar have the gas reserves it does not,” said James Dorsey, a Middle East expert at the S. Rajaratnam School of International Studies in Singapore.

“That is one reason why renewables figure prominently in Prince Mohammed’s reform programme, not only to prepare Saudi Arabia economically for a post-oil future but also to secure its continued geopolitical significance.”

Saudi Arabia also harbours atomic ambitions, with plans to build 16 reactors over the next two decades for $80 billion, despite concerns over nuclear proliferation in the Middle East.

But the economics favour solar power. Electricity from solar sources costs less than half that of nuclear power.

SoftBank’s Vision Fund would invest $1 billion for the first phase of the deal, but it is unclear where the rest of the investment will come from.

Saudi Arabia has dazzled investors with several plans for hi-tech “giga projects”, funded in part by its sovereign wealth fund, but sceptics question their viability in an era of cheap oil.

The kingdom has unveiled blueprints to build NEOM, a mega project billed as a regional Silicon Valley, in addition to the Red Sea project, a reef-fringed resort destination – both worth hundreds of billions of dollars.

“Throwing money at a project, be it a solar project or a tech city, won’t make it work unless it’s accompanied by technology that works and effective project management,” said Wald.

“Most likely, the end result of mega projects will be markedly different than the vision expressed today. That is not to say worse, but different.”

20 killed in Boko Haram attack on Nigerian army base, villages