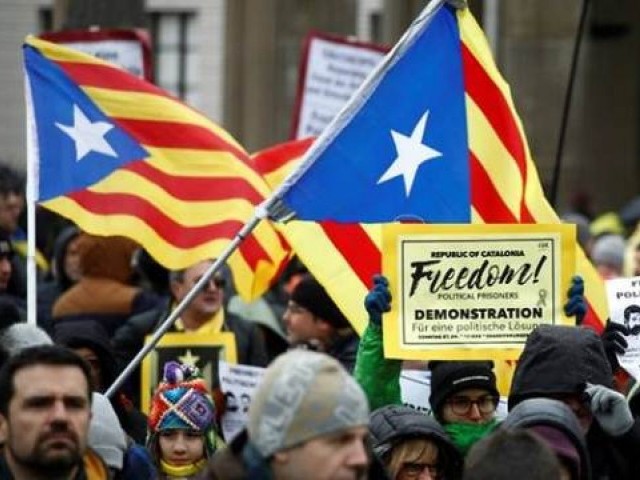 BERLIN: Hundreds of Catalan independence supporters marched in Berlin on Sunday to demand the release of ex-regional president Carles Puigdemont, who was arrested in Germany last week and faces extradition to Spain on rebellion charges.

Huddled under umbrellas in the rainy German capital, the protesters walked from Brandenburg Gate to the justice ministry, carrying banners that read “Free Puigdemont and the Catalan political prisoners” and “Spain is not a democracy”.

In an audio message from prison, Puigdemont addressed the protesters urging them “not to let their guard down in the face of a state which is acting in an increasingly authoritarian way”.

It was their right to “decide on their future”, he added.

Many of the protesters also waved Catalonia’s blue, yellow and red separatist flag as they took part in the rally organised by the German branch of the Catalan National Assembly (ANC), a grassroots pro-independence group.

“What we want to say is simply: free our elected Catalan politicians,” said 34-year-old marketing worker Monica Zaldivar, who accused the Spanish government of using the courts to go after Catalan leaders instead of trying to find a political solution.

“For me, it’s about democracy in Spain,” she said.

One of the organisers, Ferran Cornella, told AFP he estimated the crowd to number “400 or 500” people, while police gave a tally of over 300 demonstrators.

Meanwhile, in Catalonia dozens of members of the radical Committees for the Defence of the Republic (CDR) blocked a highway linking Catalonia with France erecting barriers at tolls, television images showed.

Puigdemont was arrested by German highway police last Sunday as he was travelling from Finland back to Belgium, where he has been living in self-imposed exile since Catalonia’s failed independence bid last October.

The detention came two days after a Spanish judge issued European arrest warrants for Puigdemont and other fugitive separatist leaders.

They have been ordered to stand trial for rebellion, misuse of public funds and disobeying the state for organising last year’s referendum on Catalan independence, which Madrid deemed illegal.

Puigdemont’s arrest has sent tensions soaring at home, triggering a wave of protests in the wealthy northeastern Spanish region.

German judges have ordered Puigdemont to remain in custody in the northern town of Neumuenster as they mull Spain’s request for him to be handed over.

They have 60 days to make a decision.

German media say the request has been complicated by the fact that rebellion, which carries a maximum penalty of 30 years in jail in Spain, is not a crime under German law.

In a tweet on his official account Sunday, Puigdemont was quoted as saying that the October 1 independence referendum, held exactly six months ago, marked “the start of a new era from which there is no turning back”.

China imposes tariffs in response to US duties on steel, aluminium