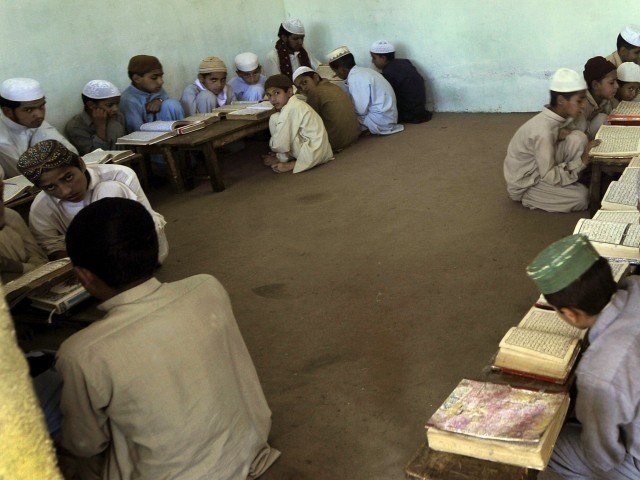 Due to the absence of the required number of schools and colleges a large number of parents have been compelled to put their children into madrassas. PHOTO: AFP

With regard to extremism and terrorism in the name of religion, the focus of scholarship and government has been on the role of militant madrassas. But the very point, why such a large number of madrassas emerged and thrived, has not been given much attention. It has been due to the outright failure of successive governments and regimes to provide adequate educational infrastructure and purposeful curricula as well as their inability to formulate a viable foreign policy, which resulted in the rise of thousands of madrassas. Due to the absence of the required number of schools and colleges a large number of parents have been compelled to put their children into madrassas. On the other hand, due to profoundly improper foreign policy, particularly in the era of General Zia (1977-88) Pakistan’s land was made as a frontline territory to fight the US-orchestrated anti-Soviet resistance in Afghanistan for which thousands of madrassas were allowed to be set up in Pakistan to radicalise a large number of Pakistanis, Afghans and Muslims from across the world to fight the Russians in Afghanistan. So finding no affordable place to educate their children, a large number of parents had had the best option to put them into those engineered madrassas, the very objective of which was militancy not education.

Generally, educational institutions in Pakistan have been found to be wanting in carrying out their primary function of disseminating knowledge in society and its members and, thus, play a critical role in the social stability and development. The failure of educational institutions in spreading knowledge in Pakistani society can even be statistically proven. For instance, the literacy rate after more than 70 years of independence is just more than 50 per cent, whereas the standard of knowledge which educational institutions has been imparting has been pathetic. This sordid state of affairs has roots in poor governance as Pakistan is one of the only 12 countries of the world that spends less than two per cent of its GNP on education. The average Pakistani boy receives only five years of schooling, while the average girl just two and a half years. The UN in the year 2004 assigned Pakistan the lowest ‘education index’ of any country outside Africa. In such an atmosphere the nurturing of radical mindsets is but natural.

Pakistani universities occasionally provided rallying grounds and launching pads for liberal and leftist political movements but by and large they have failed to play their manifest functions. Universities and colleges instead of playing their social role of educating society through its graduates and studying and finding solutions to social problems have suffered deep parochial divisions. Political parties and the establishment supported groups during General Zia’s military rule not only undercut the capacity of institutions of higher learning to play their logical part for betterment and development of society, but also became nurseries of extremism like ethnic and Muslim sectarian strife. This situation struck at the very roots of the universities to impart liberal education that in turn could offset religious extremist trends.

Moreover, due to absence of a strong research culture and capacity to study contemporary issues, Pakistani universities cannot take exact cognisance of prevailing social problems, including religious extremism, exploring the issues, reaching their root causes, and bring forth the findings, suggesting solutions and enabling the decision-makers to take informed and appropriate policy actions. Moreover, having undemocratic orientations and experience of large periods of military rules, the educational policy-makers failed to develop curricula that inculcate and cultivate fundamentally democratic, anti-extremist and tolerant values among the students.

Importantly, well before madrassas in Pakistan became hubs of militant training and extremism, many universities and colleges had already been dens of arms, ammunition and violence if not of militant training per se. The example of Punjab University is a case in point where a student group, the Islami Jamiat-e-Tulaba (IJT), associated with the Jamaat-e-Islami, since long has made the university into its virtual fort and preaching of its radical agenda. Same is true for Karachi University where extremism and violence by the All Pakistan Muhajir Students Organisation (APMSO) not only stunted educational activities but also resulted in the formation of MQM. Groups like the IJT recruited many militants from universities to fight in Afghanistan and Kashmir. On the other hand, there are indications that despite the fact that madrassas have been part of the problem of extremism and terrorism, but at the same time public schools also have their own contribution to the menace. According to a US scholar, Christian Fair, having done extensive research on the twin phenomena of extremism and terrorism in Pakistan, she was told by some Pakistani interlocutors that as much as 40 per cent of militant manpower actually comes from Pakistan’s public schools and higher education institutions.