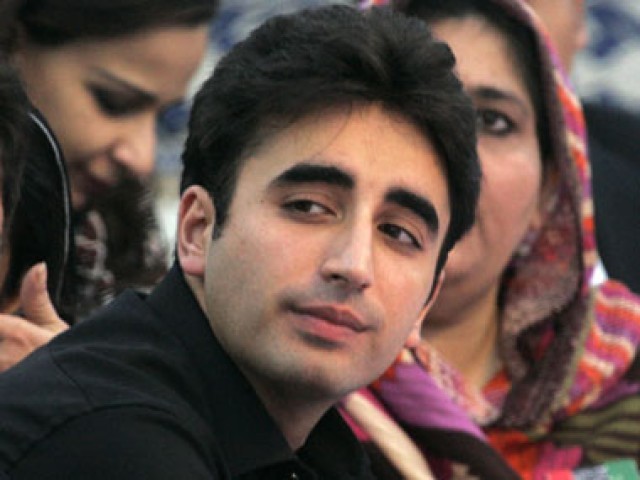 Pakistan Peoples Party (PPP) Chairman Bilawal Bhutto Zardari has blamed the Pakistan Muslim League-Nawaz (PML-N) for conspiring to roll back the 18th Constitutional Amendment, of which provincial autonomy is the mainspring.

Speaking at the inauguration of the Rs3 billion water supply scheme in Sanghar district, Bilawal on Saturday accused the ruling party of delaying the National Finance Commission award for last five years.

“The PML-N is trying to wrest the powers [which were devolved under the 18th amendment] from the provinces,” said Bilawal, warning that the PPP would oppose the bid.

He said his mother Benazir Bhutto, the former prime minister and chairperson of the PPP, struggled for 30 years to restore the 1973 Constitution passed during the regime of his grandfather Zulfikar Ali Bhutto.

“We achieved what she was struggling for through the 18th amendment,” Bilawal said and asked how his party could accept the attacks on the watershed amendment.

He also recalled that when the PPP formed government after 2008 general elections, the economy, the law and order situation and relations between the Center and provinces were in a terrible state.

“The federal powers were transferred to lower levels, the outreach of fundamental rights was expanded, the provinces were made stronger… and were given control over the natural resources,” said the PPP chairman, adding that the ultimate objective was to make the federation stronger.

Bilawal came down hard on the PML-N’s central government for its alleged attempts to sabotage the Benazir Income Support Program (BISP). He lamented that his mother’s picture was removed from the logo of the BISP programme earlier in January. “How can you expel Benazir from the hearts of the people?” he questioned.

“PML-N writes off loans taken by the rich people… the rich are given amnesty schemes but they aren’t bothered about how the poor people afford two times meal,” he said as he criticised the central government.

Bilawal bashed the PML-N for spending hundreds of billion on metro buses and finding it difficult to spare a few billion rupees for the BISP. “These cruel rulers have decided to eliminate the poor, and not poverty,” he said and vowed that he and his party would continue to fight poverty.

He said that the water supply scheme in Sanghar district would provide drinking water to 85 water-starved and underdeveloped villages of Achro Thar [the white desert].

The pipelines stretching to 240 kilometers have been laid to fetch water from Nara canal and supply it to the village.

“For centuries the people here pray for rain to meet their water requirements,” he said while pointing out that Pakistan Muslim League-Functional (PML-F) ruled Sanghar district for around five decades but could not develop the district.

“Sanghar is crying that it has been devastated by the PML-F, which is still an ally of the PML-N in the federal government,” he said.

He lashed out at the F-league “for considering Sanghar as its jagir and the people as its slaves”. “They did nothing for Sanghar, Khipro, Tando Adam and Shahdadpur and kept people in darkness,” he added.

Speaking on the occasion, Sindh Chief Minister Syed Murad Ali Shah credited his party’s government for providing water to the people of Achro Thar and for earlier supply of solar energy in the same area.

“PML-F claimed ownership of Achro Thar, but never thought about the needs of the people,” he said.

The CM Sindh expressed the hope that the PPP would clean-sweep Sanghar district which had remained a political stronghold of the PML-F.

MNA Shazia Mari, who was elected from Sanghar, said “The PPP has liberated Achro Thar and I am hopeful that the area will now see development.”