The govern­ment decide­d the best thing they could do was bury their heads in the sand
By Jahangir Khan Tareen
Published: March 29, 2018
Tweet Email 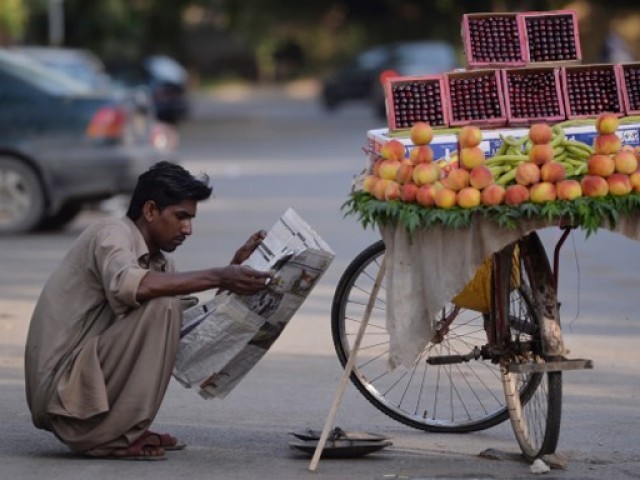 The government decided the best thing they could do was bury their heads in the sand. PHOTO: AFP

Many saw it coming, many warned of what was to come, but the government decided the best thing they could do was bury their heads in the sand. The first hit came as soon as Ishaq Dar was sent packing, the recent one came without much warning.

The rupee marked its second major devaluation in a few months. This 5% devaluation will undoubtedly increase the cost of living for the common man. The cost of petrol, diesel, LNG, cooking oil, electricity, cost of transportation, imported fertiliser and seed, and almost all other commodities and items used in our everyday lives are now going to move up. None are immune from it, only a few could have prevented it, but that was either not their intent, or was beyond their intellect.

If the first devaluation had left any room for doubt, which it did not, the second has confirmed that the recurring devaluation is the inevitable result of the disastrous economic policies pursued by Nawaz Sharif and Ishaq Dar over the past four years. Policies that may continue to haunt the country for months if not years to come.

The government has been trying to cover up its failure to fix the energy infrastructure in the country by levying heavy taxes and surcharges on gas and electricity, making both these essential means of power the most expensive in the region for Pakistani exports. In addition, in order to fudge the budget deficit numbers and artificially show a lower deficit, the government has had the FBR freeze refunds to the country’s industry, which now total nearly at Rs400 billion. As a result, for the first time in Pakistan’s history, exports are lower than what they were five years ago.

Imports have been increasing unimpeded; coupled with the every-reducing exports. We are now faced with a record trade deficit that last year stood at $33 billion — an unprecedented figure for the country. This alarming figure is set to be even higher this year, with the deficit widening at an alarming rate. The simple fact is that the various industries within the country are simply not given enough incentives and support to be able to compete in global markets. Not only are most Pakistani industries unable to compete abroad, but increasingly they are even failing at being able to compete with foreign players within the country itself. Hence, the ever-widening deficit. And to make matters worse, the government did what it always does when faced with a problem that is more complex that adding single-digit numbers, they went on a borrowing spree. During the current year, our external debt burden has increased at an average of $1 billion per month. Despite this massive borrowing, the State Bank’s foreign exchange reserves have declined by $4 billion during the current fiscal year, hitting dangerously low levels. According to the IMF, Pakistan’s net foreign exchange reserves, which stood at $7.5 billion in September 2016 when the IMF programme ended, stood at minus $724 million last month, and have declined further since.

The government’s utter failure to reform the tax system can be gauged from the fact that in 2007, there were 2.1 million tax filers in the country, the number declined to 1.26 million in 2017, and is reportedly going to be even lower this year. The entire burden of revenue generation is being placed on the middle classes, the poor, the country’s already-struggling industries and farmers, as the government continuously fails to collect tax from tax evaders and money launderers. This is one reason, along with the devaluation of the rupee, why the price of petrol has gone up in this fiscal year from Rs71 per litre and is expected to increase to more than Rs95 per litre come April 1st.

Amid threat of US sanctions, an economic crisis looms

The government has renewed three surcharges on electricity, equalling Rs1.55 per unit, which are expected to earn the government Rs110 billion in a year. This includes the Neelum Jhelum surcharge; a surcharge to finance a project that the government claims is already complete. If there’s one sector that perfectly encapsulates the sheer incompetence of this government, it has to be the energy sector. The authorities have completely failed to bring down losses, and have made little to no investment in improving the energy infrastructure of the country. The government’s only “claim to fame” is an LNG deal struck with the government of Qatar that is extremely expensive compared to international LNG tariffs and that, on the face of it, looks replete with irregularities and kickbacks. Perhaps it is to protect this expensive deal that newer and cheaper IPPs are not being allowed by the federal government to be set up anywhere and are being impeded with an endless amount of red tape.

This government also has to its credit the achievement of seeing the circular debt rise to an astronomical Rs920 billion. With an estimated Rs40 billion being added to this number each month, it is only a matter of time before this debt is passed on to consumers, in the form of both an increase in electricity bills as well as the hours that people go without electricity in their homes.

As the government continues to pass the crushing burden of their disastrous policies to the common man, it continues unveiling one amnesty scheme after another for tax evaders and the corrupt. The last amnesty scheme helped whiten Rs297 billion in black money, but also resulted in less than Rs1 billion in tax collection. The mismatch is astonishing. The government is now talking of another amnesty scheme, for those who missed out on the opportunity earlier to whiten their hidden overseas funds.

The current state of the external economic crises is a result of poor and ill-intentioned government policies, as well as weak institutions failing to deal with the economy. The poor governance emanating from these weak institutions has sapped the capacity of the government to formulate and implement policies needed to set the country on a path to prosperity. Institutions have been deliberately weakened to ensure lack of accountability for the rulers and their accomplices. No economic turnaround can take place until these institutions are provided protection from political interference and appointments are made on merit in these institutions. There is yet hope, but a lot needs to be done. The needs of the many have to be given more importance than the needs of the few. The voice of the many has to be considered louder than the voice of the few. The few may be in denial about what the mood of the many is, but they will not be able to live in denial for long.

An unsafe country to board a flight