The promo of Himesh Resham­miya’s Kajraa­re has create­d much hype. Fans of the playba­ck singer-turned-actor are...
Published: May 27, 2010
Tweet Email 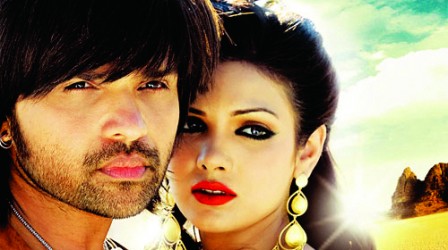 KARACHI: The promo of Himesh Reshammiya’s Kajraare has created much hype.

Fans of the playback singer-turned-actor are eagerly waiting for his movie, which is scheduled to release on July 30. The first look of Kajraare introduces the female lead – Mona Lisa – cloistered in a burqa. The movie is said to be an adaptation of Hollywood classic Pretty Woman, a romantic tale of a lawyer (Richard Gere) who falls in love with a call-girl (Julia Roberts). Reshammiya told the Indian newspaper Mid-Day, “It’s a very raw and rustic love story and the chemistry needs to be very intense and passionate. My journey as an actor has just begun and I completely surrendered myself to my director. She has presented me like never before.”

The movie marks the Bollywood debut of Pakistani model and actor Mona Lisa, who has acted in several television plays including “Riyasat”, “Kajal” and “Main Aur Tum”.

Written by Mahesh Bhatt, Kajraare is directed by his daughter Pooja Bhatt and was shot in the Middle East.

T-series creative director Divya Kumar told bollywoodhungama.com in 2008, when the film was announced,“We were looking for a girl who had innocence and was from Pakistan. It was not easy, Kajraare being an Indo-Pak love story. We checked out more than 70 girls and finally zeroed in on Mona Lisa.”

Kajraare is not the first movie starring a Pakistani actor in a lead role. Moammar Rana is making a Bollywood comeback with Ek Second… Jo Zindagi Badal De?. Starring Manisha Koirala and Jackie Shroff, the movie is set to release on July 11.