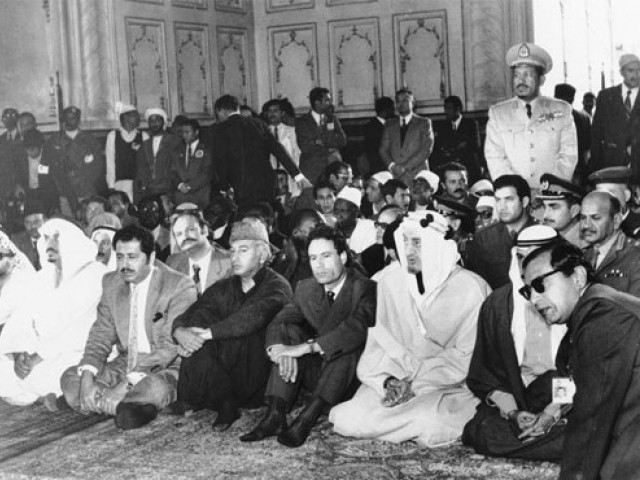 A new book on the life of former prime minister Zulfiqar Ali Bhutto claims that the ill-fated populist leader spearheaded the country’s dramatic geopolitical tilt towards the Arab world after the Pak-India war of 1971, English Al Arabiya reported.

In Born to be Hanged, author Syeda Hameeda has expressed her opinion that the country embraced its Middle Eastern allies “as a direct fallout” of the military defeat to India and the birth of an independent Bangladesh in the early seventies.

The newly released book cites “emotional succour” and “India-centric policies” as being the primary reasons behind the decision, which had until then been “rooted in the sub-continent”, to turn westwards.

According to English Al Arabiya, the Pakistan Peoples Party founder and King Faisal of Saudi Arabia enjoyed a good personal relationship, as both held a shared vision on the way forward for the Islamic world.

However, the Shah of Iran was not very eager about the ideas of the two leaders, and Hameeda further states that Bhutto even wrote regarding his ties with the Iranian leader.

“The Shah had a complex attitude towards me. He was very envious. His ambitions of being a modern Cyrus the Great contributed in no small measure to his ruin as he lost touch with reality,” the former premier was quoted as saying in Born to be Hanged.

The author also cites a co-founder of the PPP and a close friend of Zulfiqar Ali Bhutto as saying that Bhutto was very close to Muslim countries in the Middle East.

“Bhutto made very good friends in Muslim countries who, in turn, were very generous to him. Bhutto was extremely sensitive to their national interest,” Mubashir Hasan noted.

“When Libya needed help, he sent air force pilots. As Hafiz Assad was almost at war with Israel, Bhutto sent a Pakistani squadron to Syria. One contingent of Pakistani army was sent to Saudi Arabia to train their military. The same was done for Abu Dhabi,” he elaborated.

The Arab publication also highlights how the former Pakistani prime minister hosted the second Islamic Summit in Lahore in 1974 with the political and financial backing of King Faisal.

The tremendous success of the summit, which recognised the Palestinian Liberation Organisation (PLO) as the sole legitimate representative of the Palestinians, was orchestrated and afterwards portrayed to boost Bhutto’s domestic political standing after the 1971 debacle.

Hameedah has maintained that Bhutto laid the foundation of the country’s close ties with the Gulf region, which have now grown and expanded even further. The author adds that the appointment of former Pakistan army chief as the Commander-in-Chief of the Islamic Military Alliance (IMA) is an example of the close ties between Pakistan and the Saudi-led Gulf states.

The Indian writer also disclosed that the title of her book is borrowed from Sir Morrice James, the British High Commissioner in Pakistan during the 1960s.

The Englishman, who knew Bhutto well, wrote long before his execution: “Despite his gifts, I sensed in him ruthlessness and a capacity for ill doing which went far beyond what is natural. I judged that one day Bhutto would destroy himself. When and how, I could not tell. But in one of my last dispatches I wrote that Bhutto was born to be hanged.”

CJP’s focus should strictly be on issues that fall under his domain, says Nawaz