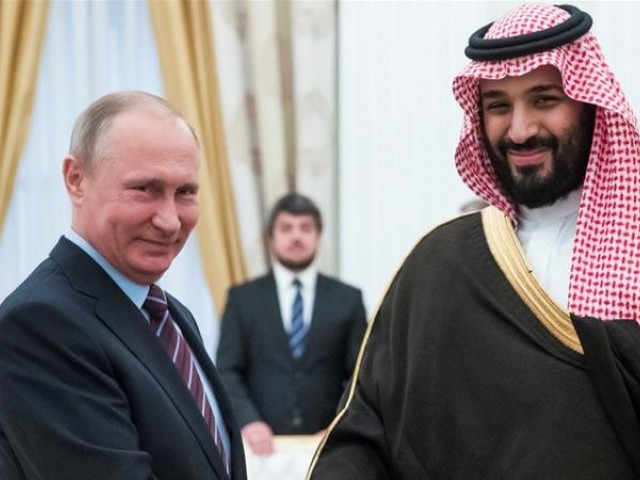 Despite being an OPEC non-member, Russia has worked alongside 14 oil exporting PHOTO:REUTERS

NEW YORK: Saudi Arabia and Russia are working on a historic long-term pact that could extend controls over world crude supplies by major exporters for many years.

Saudi Crown Prince Mohammed bin Salman told Reuters that Riyadh and Moscow were considering a deal to greatly extend a short-term alliance on oil curbs that began in January 2017 after a crash in crude prices.

“We are working to shift from a year-to-year agreement to a 10 to 20 year agreement,” the crown prince told Reuters in an interview in New York late on Monday.

“We have agreement on the big picture, but not yet on the detail.”

Russia, not a member of the Organization of the Petroleum Exporting Countries, has worked alongside the 14-member group during previous oil gluts, but a 10 to 20 year deal between the two would be unprecedented.

Top OPEC producer Saudi Arabia recruited Russia and other non-OPEC countries to help drain oversupply when oil prices collapsed to below $30 a barrel in 2016 from over $100 in 2014.

Crude has since recovered to $70 but fast-rising output from U.S. shale producers has capped prices.

“This is all about whether the arrangement is a short-term expedient to deal with this particular crisis in the oil market, or whether it reflects a realignment in world oil,” said oil historian Daniel Yergin, vice chairman at consultancy IHS Markit.

“OPEC countries want to find a way to institutionalize this relationship rather than to have it be a one-shot deal.”

“History shows that without a long-term, powerful, competent coherent, disciplined swing producer in the oil markets … you get space-mountain oil prices. Wild volatility of the sort we have seen in the past 10 to 15 years and that Saudi Arabia and Russia do not want to see again,” McNally said.

He said that would require Russia to join Saudi in building spare production capacity to use when prices rise too much.

A long-term pact between Moscow and Riyadh would effectively co-opt Russia to the Saudi-led OPEC cartel while strengthening Russia’s hand in the Middle East where the United States has long been the dominant super-power.

News of the potential oil alliance came at a time when the two have been working to cement an economic relationship despite being at odds over the conflict in Syria, where they back opposing sides.

A meeting between the Saudi crown prince and Russian president Vladimir Putin on the sidelines of a G20 meeting in China in September 2016 was instrumental in bringing Russia on board to support OPEC, non-OPEC oil curbs.

“It is a very important strategic development,” Helima Croft at RBC Capital Markets said of a potential 10 to 20 year Saudi-Russia oil collaboration.

“First, the Crown Prince is making the statement, not the oil minister, one more clear sign that he (like Putin) is the final word on his country’s oil policy.

“Second it is one more sign of the major reversal in Saudi-Russia relations. Saudi was a staunch cold war ally of the U.S. Now this Russia-Saudi alliance appears to be thicker than oil and seems to be driven by the personal affinity between Putin and MBS,” said Croft.

Workers repatriated from KSA will get dues: minister

The crown prince predicted that world oil demand would not peak until 2040, despite advances in renewable energy technologies and the electric vehicle.

In an attempt to end Saudi Arabia’s reliance on oil, he is leading a push to diversify the Saudi economy away from oil and gas by 2030.

Riyadh plans to raise funds through the flotation of a 5 percent stake in state Saudi oil company Aramco. Time is running out for an initial public offering this year but the crown prince said the IPO could still take place at the end of 2018 or in early 2019, depending on financial market conditions.

Saudi Oil Minister Khalid al-Falih said last week that documentation was ready but that a venue for the IPO had not yet been decided. The New York stock exchange is still in the running for the IPO, alongside London and Hong Kong, but Falih said there was a risk of a “frivolous” legal action if Aramco were listed in the United States.