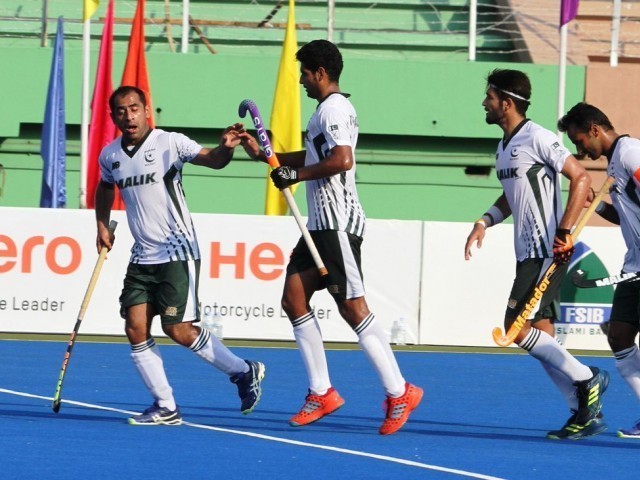 The Pakistan national hockey team departed for Gold Cost, Australia on Tuesday morning from Karachi aiming to win gold at the Commonwealth Games beginning from April 5.

Pakistan’s senior team has won one silver and one bronze medal in 2006 and 2002 respectively during their four outings in the Games. They missed the event last time around, but are hoping to make up for it with gold in this year’s edition.

The team has been training with former India hockey coach Roelant Oltmans, who has signed a two-and-a-half year deal with the Pakistan Hockey Federation (PHF).

Senior players of the team are happy with Oltmans, who has also coached the national side back in 2003-2004.

“It is really good to be training under him as he is aware of the latest techniques of coaching. His experience with the Indian national team will also come in handy during the tournament,” Muhammad Irfan Senior told The Express Tribune.

“Apart from the language barrier, Oltmans has been helpful. We were lacking in a lot of areas where the local coached weren’t able to help us. Oltmans has filled that gap,” he added.

Pakistan hockey team goalie Imran Butt has said that their main target this year is to win the Asian Games, which will give them direct entry into Olympics.

“Our aim is to prepare for the Asian Games, however our new coach wants us to perform well in Commonwealth Games too, and wants us to at least give tough time to the top teams,” he said.

Pakistan team manager Hasan Sardar has said that he is expecting a better show from the national side as compared to their recent performances on international assignments.

“Our concentration will be on playing fast and aggressive hockey,” Sardar told The Express Tribune. “The teams in our pool are either on the same level or better than us. India and England are ranked higher, but that does not mean that we will be under pressure. We have our plans ready and under Oltmans’ coaching, our boys are improving.”

Pakistan will play their first match on the opening day of the event, April 5, against Wales before facing arch-rivals India on April 7, followed by England on April 8 and Malaysia on April 11.

‘I’m not iron man’: Amir to manage workload by cutting down on Tests