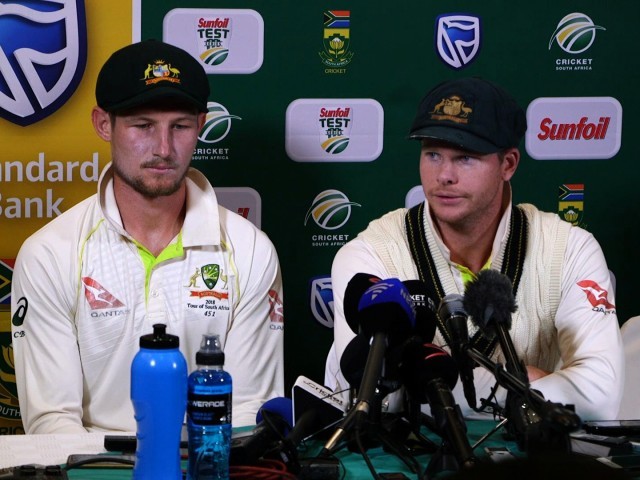 Smith’s removal from captaincy mid-Test and one-match ban may not be the only sanctions he faces. PHOTO: AFP

SYDNEY: Cricket Australia chief James Sutherland was rushing to South Africa on Monday with the sport facing one of the toughest weeks in its history as a backlash grows over a ball-tampering scandal which is likely to cost Steve Smith the Test captaincy.

Smith, 28, was removed from the captaincy for the remainder of the third Test against South Africa on Sunday and was then banned for one match by the International Cricket Council (ICC).

His team’s weekend of shame then ended in a crushing 322-run rout. Set an unlikely 430 to win, Australia were bowled out for a paltry 107 with fast-bowler Morne Morkel taking 5-23.

Now Smith is expected to face a harsh sanction from under-pressure Cricket Australia (CA) for his role in the plot which saw teammate Cameron Bancroft tamper with the ball by using yellow sticky tape, before desperately trying to conceal the evidence down the front of his trousers.

A charge of conduct contrary to the spirit of the game includes a possible life ban.

ICC bans Smith for one match, fines Bancroft over ball-tampering

CA has sent its head of integrity Iain Roy and head of team performance Pat Howard to Cape Town to conduct an investigation, with Sutherland, who is facing mounting pressure to take responsibility for what Australian media slammed as a “rotten” team culture, now deciding to join them.

“I am travelling to Johannesburg this evening and will arrive Tuesday morning local time to meet Iain to understand the findings of the investigation to that point, and to determine recommended outcomes,” he said late Monday. “We know Australians want answers and we will keep you updated on our findings and next steps, as a matter of urgency.”

Smith and all members of the team will remain in South Africa to assist in the probe to determine exactly what happened, and who knew.

Smith, whose talents with the bat have drawn breathless comparisons with Aussie great Don Bradman, is not the only man caught in the crosshairs.

David Warner also stood down from his role as vice-captain, while questions remain over coach Darren Lehmann although Smith said the former Australian international was not involved in the conspiracy.

Smith initially said the decision was made by the leadership group within the team, but reports in Australia said Josh Hazlewood and Mitchell Starc, seen as among those senior figures, were not involved and angry at being implicated.

“It’s been a horrible 24 hours — I want to apologise to our fans and those back home,” said Tim Paine, who was handed the stand-in skipper role on Sunday. “We’re struggling but the reality and the enormity of what’s happened has probably started to sink in. I don’t think we expected this to be as big as it has been, the fall-out we have seen from back home.”

Smith, also docked 100 per cent of his match fee by the ICC, will miss the fourth and final Test in Johannesburg from Friday due to his ban.

However, Bancroft, the 25-year-old opening batsman, escaped an ICC suspension. He was instead fined 75 per cent of his fee, warned, and hit by three demerit points.

The admission of cheating brought a firestorm of anger, with Australian Prime Minister Malcolm Turnbull saying he was “shocked and bitterly disappointed”.

In scathing commentaries on Monday, Australian media said the team had heaped “disgrace and humilation” on the country, while sponsors also weighed in.

“This is deeply disappointing and certainly not what anyone expects from our national cricket team,” airline Qantas, whose logo is on the team shirts in South Africa, told AFP in Sydney. “We are in discussions with Cricket Australia as this issue unfolds.”

Smith had insisted on Saturday he wouldn’t resign the captaincy he has held for three years since succeeding Michael Clarke, but his position appears to be increasingly tenuous.

Several former Australian Test stars have said it was impossible for him to continue, and Clarke insisted Smith must suffer the consequences.

But Clarke added: “I think it’s important that we do over time forgive as well.”