The men braving booby traps and attacks to secure K-P

The men braving booby traps and attacks to secure K-P 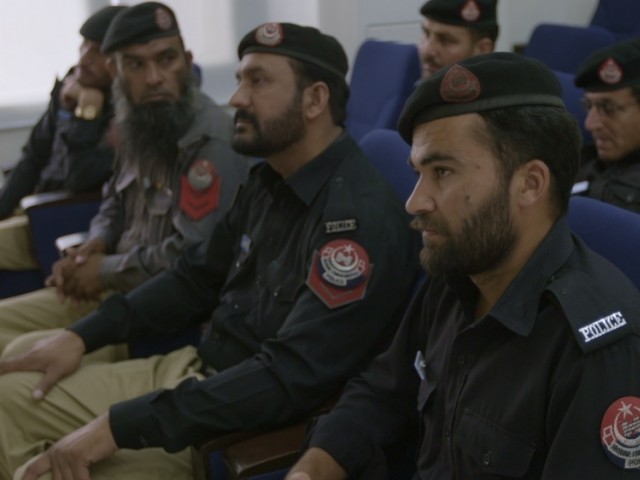 The team of 34 risk their lives to make the provice a safer place as they brave booby-trapped devices and targetted attacks. However, the unit lacks funds, stands poorly equipped and is all but dependent on international monetary contributions.

Select unit officials recently spoke to Al-Jazeera on what drives them to undertake one of the nation’s most perilous jobs.

‘At the gate of the war zone’

Shafqat Malik, leading the unit since 2009, said he promises relatives he’ll retire every following year. “I have compromised my family life. And there is a big gap – now, I’ve started feeling it. But I don’t want my family to live here. They’ve been living in a different city because this is a war zone,” he said.

“In the early 2000s, countless armed groups started to operate here in the KPK province. We are at the gate of the war zone. After 9/11, the United States began its ‘war against terrorism’. NATO forces and international forces began fighting in Afghanistan, and Pakistan became coalition partners with them. So, the terrorists started to treat Pakistani security forces as their enemies,” he added.

“Their objective is to destabilise this country. And give people a message: ‘We can penetrate anywhere. You people are not safe.’ Al Qaeda, Pakistani Taliban – they’re the major stakeholders. And then there are various local sectarian groups. And to curb all this damage, I have only one bomb disposal unit,” Malik added.

“We have to foil their mission. They’re trying to demoralise us but, thank God, we won’t be demoralised. Our unit is still standing, and will always stand here in this war zone with the people,” he said.

“We must protect our own lives along with the lives of others. Bravery is not about getting yourself killed. Fifteen of our officers were already [killed] fighting this war. I can’t deal with losing another one of my boys. Now if someone is [killed], I will leave this unit,” Malik added.

‘We are scared of our own people’

Abdur Rahim, another BDU officer, hails from a village near the tribal areas. He has been under pressure to quit and find a more lucrative occupation.

“When I was younger, I was very interested in showbiz. I’d see films and hope that, one day, I’d play the hero in one. In high school, I had a friend that used to take me to the television studios and they started giving me minor roles in some TV dramas,” he said.

“But my family has always been very strict, especially my father. He would make me swear I’d never do it again. I’ve been beaten up over these dramas quite a bit. I can’t make my parents upset, so I have placed a rock on my passion,” Rahim added.

“In 2009, I finally left that work and joined the true heroes of the bomb squad. If you make one mistake defusing a bomb, it’ll be your first and it’ll also be your last. We’ve seen our friends die with our own eyes, we’ve collected them in plastic bags and brought them back,” he said.

“People say ‘Don’t work in the police force, they’re being targeted.’ Everyone is scared. We’re scared of our own people,” he said.

“Whenever I go out to defuse a bomb, I immediately see my children standing before me, as if they were blocking my path. And I think about what will happen to them if I die. But I trust their fate is in God’s hands, so I go ahead,” Rahim said.

“Many of my friends are going abroad to look for work. And if I get a chance, I may leave, too. My family wants me to leave this work and my father said I should go to Saudi Arabia. There are good job opportunities there and the salaries are also very good. I won’t be worried about blasts happening every other day. I’ll be at peace,” he said.

“I really don’t want to leave the BDU, but what can I do? The situation is such that I cannot cover my household expenses or educate my children on the salary I get here. It’s a tough decision, but it must be swallowed like a gulp of poison,” Rahim added.

‘We fight with our passion and faith’

Inayatullah Khan was conferred Pakistan’s highest civil honour for bravery. The BDU official has been serving since 2000.

“I was born and brought up in KPK. I belong to a family of very little means. Our school didn’t have walls or a roof. We were taught under the shade of a tree. But, despite its shortcomings, it taught me a lot. I was taught morals and respect for humanity, that’s made me who I am today,” he said.

“Since I started serving with the BDU, we’ve destroyed over 7,000 explosives. We barely have any equipment. We fight with our passion and faith, Khan said.

“Once, a suicide bomber tried to blow himself up, but his jacket did not detonate. He was lying injured and I approached him and took his jacket off. I’ve taken so many jackets off suicide bombers. Some are so young that they have no idea what’s going on. One day, he is calling out to his mother; the next day, he puts on a vest and blows himself up in a crowd,” he said.

“They are people like us. We’ve let them down. They have no access to education. They see US drones coming into the country and destroying everything; the strikes kill children, women and the elderly. They don’t have the resources to get to the person flying the drones, but we are within their grasp, we are closer to them. We suffer the brunt of their helplessness,” Khan said.

“I treasure my time with my son. But whenever I’m around kids, and especially when my kid’s hands are in mine and I am playing with him, at that moment, a certain scene comes to my mind. I cannot forget it, it is a very painful memory, he added.

“There was one blast where the victims were little kids playing cricket. When I reached the location, a child covered in blood ran towards me and asked, ‘Uncle, where were you when the blast occurred?’ What could have been a bigger regret than that? Or a more horrible scene? When you are picking up tiny little hands and fingers … whenever I look at my son’s hands, I think about those hands,” Khan said.