Bolton's appoin­tment as White House nation­al securi­ty advise­r was not a surpri­se but it was still felt as a rude shock
By AFP
Published: March 24, 2018
Tweet Email 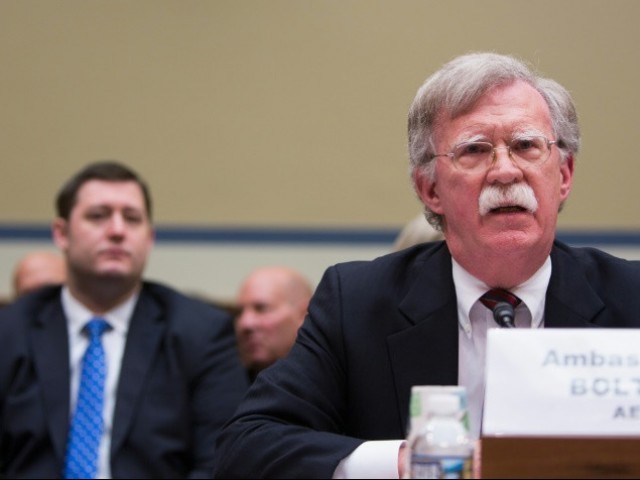 WASHINGTON: By tapping conservative firebrand John Bolton as his national security chief and hardliner Mike Pompeo as his top diplomat, US President Donald Trump has dramatically raised the stakes in world affairs.

Now, if Trump decides to abandon the Iran nuclear deal he has an adviser who thinks Iran can be disarmed by force — and was one of the principal players who pushed for the 2003 invasion of Iraq.

If Trump’s planned summit with Kim Jong Un does not lead quickly to North Korea’s nuclear disarmament he has a team that is more ready than his last to contemplate pre-emptive war.

And, as his ambassador to the United Nations Nikki Haley pushes wahead with efforts to cuts to US funding for the world body, he will have a die-hard unilateralist by his side, cheering him on.

Bolton’s appointment as White House national security adviser was not a surprise but it was still felt as a rude shock by many foreign policy professionals and commentators.

“John Bolton is a national security threat,” declared Colin Kahl and Jon Wolfsthal, who were senior advisers to former president Barack Obama, in a stark commentary for Foreign Policy magazine.

“The good thing about John Bolton, President Trump’s new national security adviser, is that he says what he thinks. The bad thing is what he thinks,” the board warned.

David Wright, of the Union of Concerned Scientists, called said that Bolton’s “extreme views are particularly dangerous now given his opposition to diplomacy with Iran and North Korea.”

Pressure group Human Rights Watch has denounced Pompeo as a defender of torture and discrimination against Muslims and homosexuals and wrote to urge the Senate to reject his appointment.

Trump won’t care what former Obama advisers and New York editorial writers say about Bolton and Pompeo, but at first glance their policy views appear to contradict many of his own.

Before running for president the New York property developer had no foreign policy experience beyond promoting his international hotels and resorts — and it showed.

Several of his first generation of advisers picked up on the campaign trail are under investigation over their alleged involvement in Russian election meddling.

Trump’s first national security adviser, Michael Flynn, was sacked for lying about contacts with the Russian embassy and has since pleaded guilty for making false statements to the FBI.

Under the influence of his nationalist former strategy guru Steve Bannon, Trump’s foreign policy positions took an isolationist bent, and he condemned the Iraq war that Bolton worked so hard to promote.

Trump reverses threat to shut down US government

But in his first year in office, Trump chafed under the moderating influence of his second national security adviser HR McMaster and his now sacked secretary of state Rex Tillerson.

He preferred his near daily briefings with his CIA director Mike Pompeo, whose gung ho attitude towards Iran rhymed with his own, and enjoyed watching Bolton fulminating on Fox News.

And this despite Bolton’s critique of administration policy. Trump is proud of the diplomatic pressure campaign he thinks forced Kim to invite him to a nuclear summit. Bolton thinks it’s a failure.

“It is past time for Washington to bury this ineffective ‘carrots and sticks’ approach,” Bolton wrote in August in a Wall Street Journal op-ed calling for pre-emptive military strikes.

Many in Washington fear that Trump’s all-or-nothing bid to resolve the North Korean stand-off in early one-on-one talks with Kim will fail and leave all diplomatic options exhausted.

If this comes to pass, then with Bolton at his side Trump is more likely to resort to military action that might spiral into a war that could kill millions and harm US allies Japan and South Korea.

And, as for Iran, many saw the sacking of Tillerson as the death knell for a deal still fiercely defended by Washington’s European allies as the best way to prevent Tehran from getting the bomb.

But with Pompeo set to replace him and Bolton on his way to the White House, the accord’s coffin may well have been nailed shut.