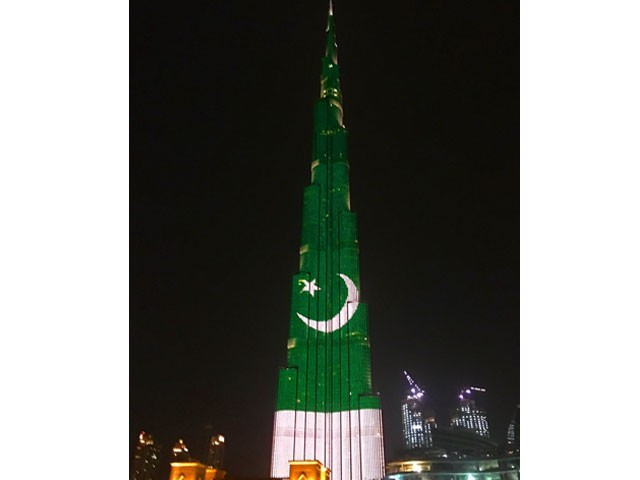 Burj Khalifa lit up in colours of the Pakistan flag. PHOTO: BURJ KHALIFA

Pakistanis living in UAE celebrated the Pakistan Day with traditional zeal and patriotic spirit at the premises of the Embassy of Pakistan in Abu Dhabi.

Pakistan Ambassador in UAE, Moazzam Ahmad Khan, in his message on this occasion, congratulated the Pakistani community living in the UAE.

He said on this very day, the Muslims of the subcontinent resolved to achieve a separate homeland in order to lead their lives with dignity, honor and freedom.

Ambassador Khan recalled the challenges confronted by Pakistan since its inception but were addressed through national resolve, resilience and commitment by the Pakistani nation.

Ambassador also thanked the friends of Pakistan in particular the UAE who always stood by it in difficult times and contributed to its development.

He paid special tribute to the founder of the UAE His Highness Sheikh Zayed bin Sultan Al Nahyan (Alarehma) who used to call Pakistan his second home.

Ambassador underlined that the sapling of friendship planted by Sheik Zayed and Pakistani leadership has grown into a tall tree.

It is manifestation of the close and brotherly relations between Pakistan and the UAE.

Earlier, on 21st March, the “Pakistan Day” reception was hosted by the Embassy at the local hotel which was attended by a large number of Ambassadors and their representatives, officials of the UAE Government, media and members of Pakistan community.

His Excellency Sheikh Nahyan bin Mubarak Al Nahyan, Cabinet Member and Minister of Tolerance and Her Excellency Dr. Maitha bint Salem Al Shamsi, Minister of State were the Chief Guests on the occasion.