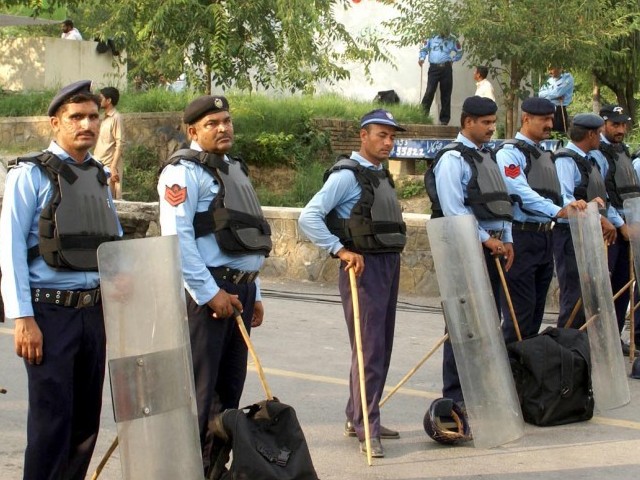 ISLAMABAD: As preparations for Pakistan Day and a parade in the capital pick up, authorities have intensified their crackdown on unscrupulous and criminal elements in the city, arresting as many as 358 suspects in the past fortnight alone.

According to data released by a police spokesperson on Sunday, of those caught, there were 18 dacoits, 108 runaway children while stolen items worth over Rs53.79 million from them.

He stated that Senior Superintendent of Police (SSP-Operations) Najeebur Rehman Bugvi had directed all officers to accelerate their efforts against criminal activities taking place around the capital.

In light of these directions, officers managed to crack eight robbery cases and arrested as many as 18 suspected thieves.

Furthermore, looted items worth Rs1.033 million were recovered from them.

The police officer said that they had also nabbed a further 24 culprits involved in 14 cases of street crime and theft and recovered stolen items worth Rs23.79 million from them.

Moreover, the police initiated a crackdown against those involved in drug pushing activities.  Police arrested 60 drug pushers and recovered 14.077 kilogrammes hashish, 1.12 kilogrammes of heroin and 2,557 wine bottles from their possession.

Further, 18 suspects were held for their alleged involvement in car lifting, tampering vehicles, and stealing motorbikes.

The officer said that they had managed to recover cars and motorbikes worth Rs24.17 million from them. Over the past week, the police had also recovered 97 bikes stolen from Islamabad, Rawalpindi and other parts of Punjab worth more than Rs4.8 million.

Further, police completed investigations in 237 cases and their challans were submitted in the relevant courts.

In all, 29 search operations were conducted in various areas of the city and 71 suspects were also held, the operation concluded in a recovery of weapons and ammunition from them.

A further 54 suspects were arrested for carrying illegal arms while three Kalashnikovs, 51 pistols and 416 rounds of ammunition were recovered from them.

Two murders cases were also solved and four persons involved in them were arrested.

Islamabad SSP  Najeeb ur Rehman Bugvi has said that criminal activity would not be tolerated anywhere in the capital and urged citizens to reach out to the social media cells of the Islamabad Police in case they spot any illegal activity around them.