Both teams plan to use Dubai condit­ions in their favour­
By Nabil Tahir
Published: March 18, 2018
Tweet Email 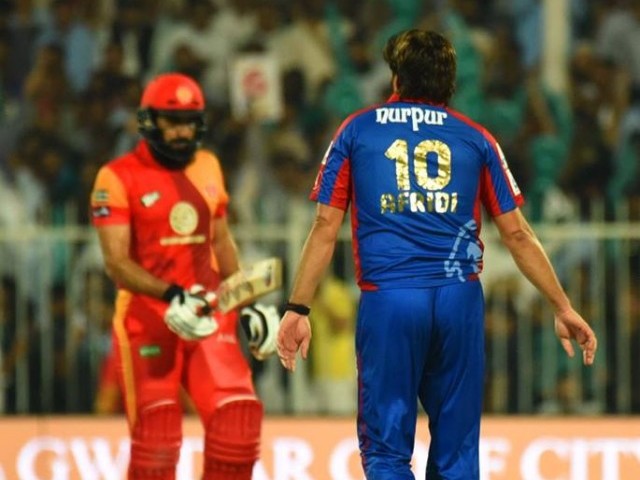 TWO SHOTS AT FINAL: The winner of the Islamabad-Karachi duel will get direct entry into the final of PSL3, while the losing team will play against the winner of the first eliminator. PHOTO COURTESY: PSL

Kings beat United by seven wickets on late Friday thanks to left-arm pacer Usman Shinwari’s four-for and entered the qualifier courtesy their second position on the league table (11 points from 10 matches).

The winner of the Islamabad-Karachi duel will get direct entry into the final of PSL3, while the losing team will play against the winner of the first eliminator, which will take place between Peshawar Zalmi and Quetta Gladiators in Gaddafi Stadium, Lahore on March 20.

The second eliminator will take place on March 21 in Lahore.

Karachi are banking on their foreign players to compete for the silverware as all of them, except England captain Eoin Morgan, have agreed to visit Pakistan for the playoffs.

“Karachi are in good form and the qualifier is in Dubai where we have been playing for the past four weeks,” said Kings’ assistant coach Faisal Iqbal. “So we are in a good position to beat Islamabad and enter the final.”

Iqbal thinks the win against Islamabad in PSL3’s last league match not only helped them play the qualifier, but also boosted the team’s confidence.

“We have been quite impressive in the pool matches and finished in second position, which not only increased our chances of making it to the final, but has also raised the confidence and morale of the team,” he said. “We will be playing with the same strategy here in Dubai in the qualifier [which helped us beat Islamabad] before we travel to Pakistan.”

Meanwhile, Karachi Kings team manager Sikandar Bakht named the players who are ready to visit Pakistan. “Karachi Kings foreign players including Joe Denly, Tymal Mills, Collin Ingram, Ravi Bopara, Lendl Simmons and David Weisse are ready to travel to Pakistan for playoffs and the final to be held in Lahore and Karachi, respectively.”

The second team in the qualifier, Islamabad United, gave their mainstays time to rest in the last league match loss against Karachi, believe they have the ability to beat Karachi and make it to the final.

“We have topped the pool by winning our last matches in the league, except the last one where we didn’t use our full force. We wanted them to be ready for the qualifier and will be using them in the best manner to win against Karachi,” Islamabad United spin bowling coach Saeed Ajmal told The Express Tribune.

The former Pakistan off-spinner said Islamabad will be lacking the services of a few foreign players, so it is imperative they enter the final directly by winning the qualifier.

“Playing the first qualifier here in Dubai gives advantage to both teams and they will be looking to make the best of this chance,” he said. “We will be missing some foreign players in Pakistan, so it is better to book a spot in final from this match.”

He further said that the same strategy will be used under Misbahul Haq’s leadership and the whole team is confident to win the match against Karachi Kings.

Meanwhile, Peshawar Zalmi and Quetta Gladiators will be arriving in Lahore on Sunday to prepare for the eliminator scheduled to be played on March 20.

15 suspected bookies arrested in Karachi ahead of PSL final