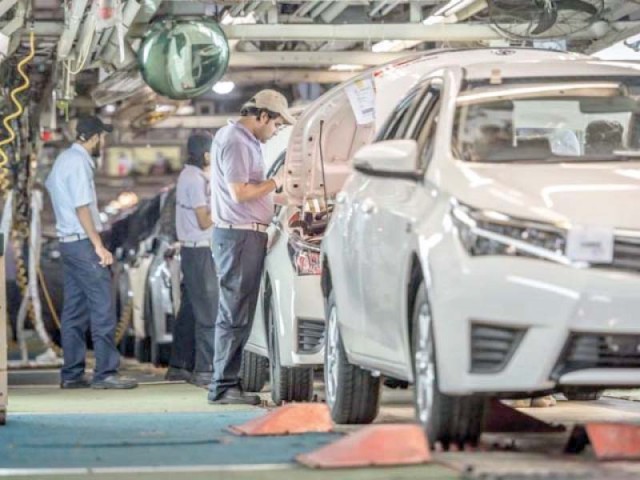 New industry players would also start producing cars from 2019 onwards that supported the expectation that industry production would cross 500,000 units much before 2025. PHOTO: FILE

MUZAFFARABAD: Indus Motor Chief Executive Officer Ali Asghar Jamali has announced that his company will definitely increase car prices in coming days in the wake of appreciation of the US dollar and Japanese yen against Pakistani rupee since December 2017.

“We will jack up prices soon due to rising value of the dollar and the yen,” he said at a workshop on the automobile sector on Friday.

This will be the second increase within three months as carmakers had pushed up prices immediately after the government let the rupee lose over 5% of its value against the dollar in December 2017 in the face of persistent pressure due to a fast widening current account deficit.

Despite the rise in vehicle prices, consumer demand has remained strong across all categories in recent years. With improving security situation and better electricity supply, experts expect further growth of the industry in coming years.The CEO of Indus Motor – the makers of popular Toyota Corolla – expected local value addition to grow further in coming years that would push up sales volumes.

Though the rising current account deficit and further rupee depreciation may hurt automobile sales in the next couple of years, they were expected to rise past 500,000 units sometime in 2021 or 2022, Pakistan Association of Automotive Parts and Accessories Manufacturers’ (Paapam) former chairman Aamir Allawala said.

“Owing to robust demand and rising incomes, automobile sales have to grow fast in Pakistan in coming years,” he remarked. He pointed out that new industry players would also start producing cars from 2019 onwards that supported the expectation that industry production would cross 500,000 units much before 2025. Responding to a question, Allawala said Chinese companies had started investing in Pakistan which was a very good omen for the national economy.

The auto industry also looks prepared for the challenge from Chinese engineering companies that can give a tough time to auto parts’ makers in Pakistan. “Pakistan should target to become one of the top 10 carmakers in the world; it will take time, but it is possible,” he said.