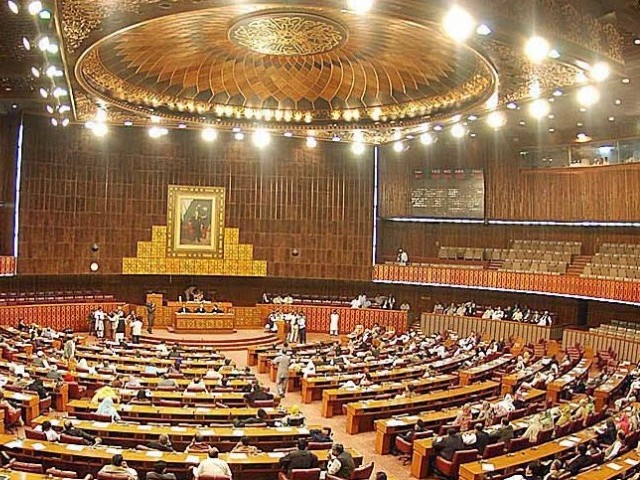 Lawmaker leads prayers for al Qaeda chief defying calls from deputy speaker that he needed permission to do so. PHOTO: FILE

Parliamentarians were stunned on Tuesday when a lawmaker led prayers for al Qaeda chief Osama bin Laden, defying calls from Deputy Speaker Faisal Karim Kundi that he needed permission to do so.

At the National Assembly session, Maulvi Asmatullah, an independent candidate from NA-264 stood up and said Bin Laden had reportedly been given funeral services by the Americans and “we should pray for him”.

The deputy speaker was administering the proceedings on a private members day, but he could not convince the lawmakers to stick to the rules of business. Osama bin Laden was killed in a US operation in Abbottabad in the early hours of May 2.

Earlier, Prime Minister Yousaf Raza Gilani said in the National Assembly that “Osama bin Laden was the most wanted terrorist and enemy number one of the civilized world.

Elimination of Osama bin Laden, who launched waves after waves of terrorist attacks against innocent Pakistanis, is indeed justice done. However, we are not so naïve to declare victory; missions accomplished, and turn around.”

The first of its kind prayer service at the floor of the National Assembly reflected a divergent view from the official stance over the killing of Bin Laden.

Meanwhile in Quetta, Five PPP ministers have demanded the immediate expulsion of JUI-F from the provincial cabinet for promoting terrorism by supporting the Taliban in Balochistan.

Taking up the floor during Assembly proceedings on Tuesday afternoon, PPP Minister Mir Sadiq Umrani staged a walk-out and accused the JUI of being involved in terrorism.

Addressing a news conference after the session, Umrani said that the JUI-F is imposing policies to only protect its own interests.

He alleged that JUI-F annually take away 60 per cent of the total funds of the province. “The entire budget of the Balochistan government has been monopolised by JUI Ministers,” he claimed.

Talking to the media, Chief Minister Nawab Aslam Raisani termed the allegations false and baseless, while JUI-F Parliamentary Leader Maulana Wasey said his party has supported the PPP to form a coalition government.