An electr­ical sub-statio­n to energi­es the nation’s first metro train has also been comple­ted
By Our Correspondent
Published: March 15, 2018
Tweet Email 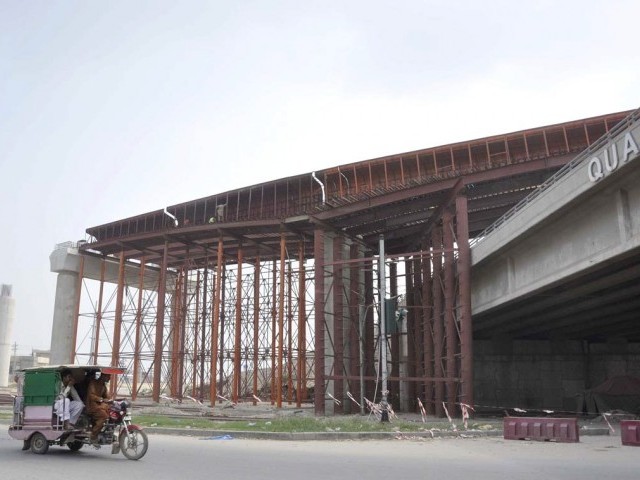 Punjab Chief Minister’s Adviser and the Lahore Orange Line Metro Train (OLMT) project Steering Committee Chairman Khawaja Ahmad Hassaan said overall 86% civil works of the projects have been completed, besides completion of half of the electrical and mechanical works.

Addressing project’s weekly progress review meeting, he said, first four metro train stations between Dera Gujjran and Mahmood Butti would be completed during the current week, while contractors have been tasked to complete another seven elevated stations between Pakistan Mint and Lakshmi Chowk. Half of the rail track had already been laid in this section, he added.

He highlighted that an electrical sub-station to energies the nation’s first metro train has also been completed. Though it was one of the difficult tasks to install u-tub girders of elevated track over Thokar Niaz Beg but it has also been successfully completed.

All train sets for Orange Line now in Pakistan

It was disclosed in the meeting that development works of the GPO Station have been divided in five sections of which 75% concrete work has been completed of four sections. So far over 7,900 cubic metres concrete has been poured and 1,800 tonnes of steel has been laid for construction of the GP station. The remaining 25% development works were being done on fast track after which Mall Road would be opened for traffic by March 31.

The 27-kilometre metro train project is estimated to cost over $1.65 billion (Rs165 billion), which is being funded through a loan by China’s Exim Banks. Project documents highlights around $1 billion would be directly transferred to the Chinese contractors, CR-NORINCO, for procurement of the rolling stock while the remaining amount would be transferred to Pakistan for construction of track and provision of allied infrastructure.

The project is part of the city metro network and when completed, it would connect Raiwind, Multan Road, Mcleod Road, Lahore Junction Railway Station and the Grand Trunk Road.