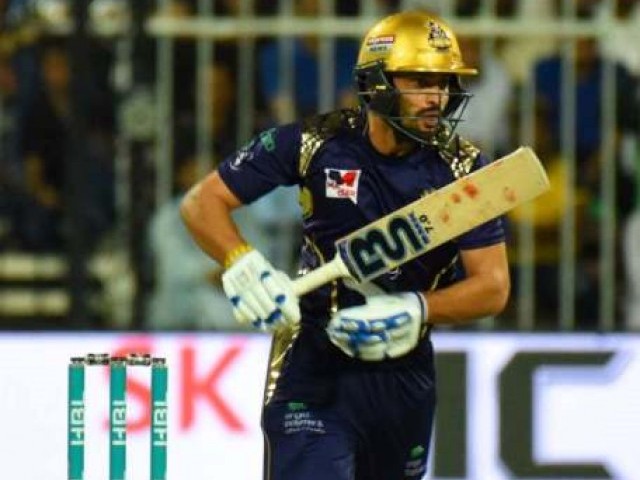 Spin battle: Conditions in the UAE mean that the side with the better spinner goes into the game with a significant advantage. PHOTOS COURTESY: PSL

DUBAI: Quetta Gladiators’ star all-rounder Muhammad Nawaz, who has continued his impressive form in the Pakistan Super League (PSL), is eyeing a scalp against leaders and newcomers Multan Sultans.

Multan outplayed Quetta the last time these two teams clashed against each other and Nawaz is looking to avenge that nine-wicket defeat.

“This format favours the batsmen and that means the bowlers have to work really hard if they want to trouble the batsmen,” said Nawaz, while talking to The Express Tribune. “If a bowler continues to bowl at a good line and length then it helps restrict the batsmen and that is the best you can hope for.”

Nawaz revealed the amount of work and effort that goes into preparing for a match. “We practice for a match keeping the opposition in mind,” he said. “I personally research about all the weak and strong areas of every batsman by watching their videos. I then try to target the weaker areas of the batsmen. Bowling at the right time to the right batsmen at the right line and length is what helps me claim wickets.”

Multan may have already shown why they are considered by many to be standout favourites to win the PSL while Quetta have struggled in the tournament so far but Nawaz believes they have what it takes to defeat the leaders, especially since they now face them in Dubai as compared to Sharjah.

“The pitch behaves differently in Dubai as compared to Sharjah,” he said. “I personally feel that bowling is easier in Dubai and I am confident that I can trouble the Multan batsmen more in Dubai than what I did in Sharjah. We will be doing our best to claim the two points against a difficult Multan side.”

The left-arm spinner believes that Quetta need their pacers to step up to the plate since they are the ones who have to bowl during the crucial death overs of a match.

“Fast-bowlers have several options that they can rely upon when bowling at the death,” he said. “They have both bouncers and yorkers to turn to. A spinner cannot bounce out a batsman or surprise him with the shorter pitched stuff so our element of surprise is significantly reduced. I still practice bowling during the death overs since that has helped me improve my skills further and I have learned a few tricks that have improved my confidence.”