More than two years after the assass­inatio­n of former prime minist­er Benazi­r Bhutto, the invest­igatio­n has come full...
By Quatrina Hosain
Published: May 27, 2010
Tweet Email 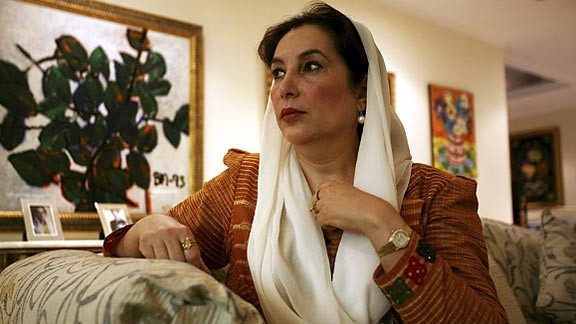 ISLAMABAD: More than two years after the assassination of former prime minister Benazir Bhutto, the investigation has come full circle.

A Joint Investigation Team constituted by the PPP government has verified that the Tehreek-e-Taliban Pakistan (TTP), led at the time by Baitullah Mehsud, carried out the attack that killed Bhutto. The JIT report submitted on Tuesday adds little to the information already made available by the interim government when Bhutto was assassinated. But some interesting elements have emerged.

One of the key conspirators, Hasnain Gul, who was arrested on January 5, 2008, had confessed that the two suicide bombers had stayed at his house a day before the assassination. The suicide bombers left a shawl, a cap and a pair of joggers at Hasnain’s residence. On Sept 12, 2009, some 20 months after the assassination, these articles of clothing were sent to the FBI Laboratory in Quantico for DNA analysis. The FBI report was then compared to the DNA obtained from body parts of the suicide bombers recovered from Liaquat Bagh.

That the two samples matched corroborated Gul’s confession and firmly linked the two suicide bombers with Mehsud’s network. Another connection has also been established by comparing cellular and landline phone records, which have linked the conspirators to each other and to the penultimate telephone conversation between a man identified as “Maulvi sahib” and “Ameer sahib”. That discussion of the assassination was intercepted by the Inter Services Intelligence shortly after Bhutto’s assassination and was made public by former president General Pervez Musharraf’s interim government. Ameer sahib was been identified as Baitullah Mehsud by one of the arrested men.

In another key revelation, the JIT report lists five men who are currently under arrest, one of whom is Gul, and seven others who were involved in the planning and the execution of the assassination. Topping the list is Baitullah Mehsud. The report indicates that of the men still at large, at least one – Abadur Rehman Farooq, who was last seen in Khyber Agency – is suspected of carrying out terrorist attacks in Peshawar for the TTP and al Qaeda. Almost all the conspirators have links to the Madrassah Haqqaniya in Akora Khattak and further arrests have been made by the JIT from Akora Khattak.

The implications of these revelations are not lost on Musharraf’s spokesman Major General (retd) Rashid Qureshi who believes that Musharraf’s stance has been vindicated and he is innocent. He told The Express Tribune that the JIT report confirmed what had been established by investigators at the time and termed as “crazy” anyone who suspects that Mehsud may have been hired by someone else. However, federal information minister Qamaruz Zaman Kaira was reluctant to comment on the report and its implications, telling The Express Tribune he had not yet read it but acknowledged that the JIT was set up by the PPP government.

The JIT questioned 34 people in connection with the investigation, including Makhdoom Amin Fahim and others in the car with Bhutto, former Intelligence Bureau chief Brigadier (retd) Ejaz Shah, police officers, doctors who attended to Bhutto and others. Conspicuously absent from this list are federal ministers Rehman Malik and Babar Awan, who were strongly criticised in the UN report on Bhutto’s assassination. The JIT has reserved comment on the actions of police officers who hosed down the crime scene and failed to carry out autopsies on others who died at Liaquat Bagh that day, saying the statements of the police officers were contradictory.

A further report is awaited but it seems unlikely if anything will be uncovered other than panic and incompetence. Does this indicate that the People’s Party government has endorsed the previous government’s claim that Bhutto was assassinated on the orders of Mehsud? If so, this would pave the way for General Musharraf’s return to Pakistan without being arrested for Bhutto’s death. It also remains unclear why the government insisted on an investigation by the United Nations when evidence collated by their own investigative team’s findings has revealed no grand conspiracy beyond Mehsud and his men.