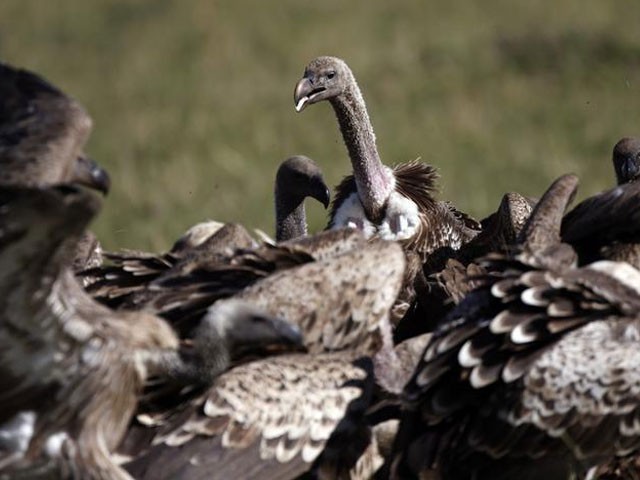 Eric Ole Reson, Program Coordinator of the Maasai Mara Wildlife and Conservancies Association, said that survival of the critically endangered vultures and other species in Kenya is at stake due to human actions.

He noted that his organisation and a team of other bird conservators have discovered 40 dead vultures since Feb 9 in the conservancies around Masai Mara National Park and concluded that the birds consumed a poisoned livestock carcass.

He urged retaliatory killers of the vultures to stop poisoning and help reverse their declining population.

Retaliatory poisoning usually occurs when livestock is attacked by predators such as lions, hyenas and leopards.

Livestock farmers then resort to lacing their dead livestock with easily accessible agro-chemicals with the intention to kill predators but vultures that scavenge on dead animals succumb to the poison and hundreds die as a result.

According to Munir Virani, Director of Global Conservation Strategy at the Peregrine Fund, vulture populations globally are declining rapidly due to intentional and accidental poisoning.

He revealed that the birds succumb to death as a result of habitat loss and lack of food and are considered one of the most threatened group of animals in the world.

Africa has eleven species of which six are found nowhere else in the world. Six of the eight species that occur in Kenya are highly threatened with extinction, according to the IUCN Red List of threatened species.

“This means that without conservation intervention, these species have very little chance of survival and may possibly go extinct within our lifetimes,” said Virani.

“We are providing people on the ground with the knowledge and tools to respond to poisoning events,” added Paul Matiku, the Executive Director of Nature Kenya.

He said that the organisation has heightened awareness from within the Maasai communities with the help of rangers and ground staff.

Masumi Gudka, Vulture Coordinator for Birdlife International said that illegal wildlife poisoning is a huge problem for the future survival of vultures and carnivores across the continent.

He called for concerted efforts in thwarting future poisoning attempt and helps investigate the source of the problem.

“The existence of vultures and other important bird species is crucial to any society because they are productive and provide countless services to humanity and biodiversity,” said Gudka.

These vulture deaths coincide with a spate of other retaliatory poisonings across Africa where six lions and 72 vultures were reported to have been poisoned in the Ruaha-Katavi landscape in Tanzania in February.

Other deaths were also reported in Mbashene, Southern Mozambique where 103 vultures were killed after feeding on a poisoned elephant carcass and 50 more were poisoned in Gorongosa National Park, Mozambique.

Kenya is a signatory to the Convention on the Conservation of Migratory Species of Wild Animals.