Nisar plays down absence at key PML-N meetings amid speculation

Nisar plays down absence at key PML-N meetings amid speculation 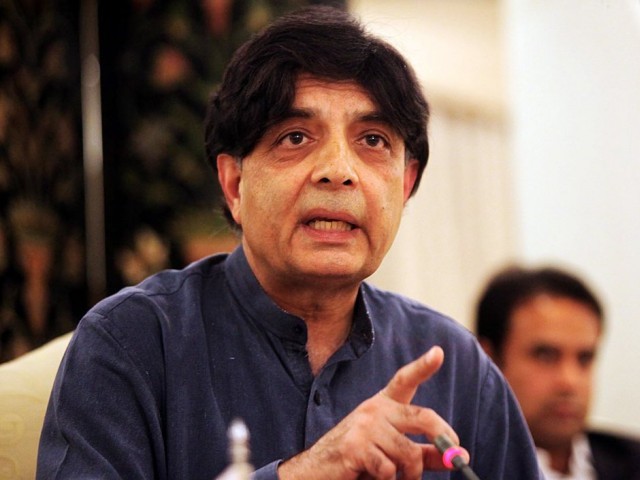 Former interior minister Chaudhry Nisar Ali Khan played down on Saturday his absence at recent Pakistan Muslim League-Nawaz (PML-N) meeting, saying attending or not attending the party meetings did not qualify to be news.

Speaking to reporters after casting his vote for today’s Senate election in Islamabad, he said his absence at Friday’s meeting made headlines despite the fact that he did not attend any parliamentary party meeting in the last four years, Express News reported.

“I didn’t even attend any [parliamentary party] meeting while PML-N president Nawaz Sharif was prime minister,” he added.

Nisar said he coincidentally met Prime Minister Shahid Khaqan Abbasi yesterday. However, nothing regarding Senate polls was discussed with him, he added.

When asked if he would play on ‘front foot’ after Punjab Chief Minister Shehbaz Sharif’s election as caretaker president of the party, the former minister said he was not playing cricket.

Commenting over Pakistan Tehreek-e-Insaf (PTI) chief Imran Khan, Nisar said he went to Aitchison College with the former, who he added was not only a ‘very good friend’ but also a great cricketer. “I used to play cricket as well, but both of us are not playing the game anymore.”

Nisar to speak up in ‘couple’ of days

Nisar was also absent at the PML-N Central Working Committee (CWC) meeting held in Lahore on Tuesday. Some media reports suggested that Sharif had not extended an invitation to Nisar to participate in the CWC while others claimed that the ex interior minister did not show up despite being invited.

There were also reports that Sharif was not ready to invite Nisar despite the insistence of senior party leaders including Shehbaz Sharif, Khawaja Saad Rafique and Ayaz Sadiq.

It is claimed that the reported decision of the former PM not to invite Nisar to participate in the CWC meeting may have been the result of Nisar’s open opposition to the party’s political strategy adopted in the wake of the July 28, 2017 verdict of the Supreme Court of Pakistan in the Panama Papers case.

After the verdict, Nisar had criticised his party’s strategy to tackle the situation. He had been advising the PML-N leadership not to stride the collision course with state institutions including courts. He has also been critical of Sharif’s political scion Maryam Nawaz’s role in the party at the decision-making level.