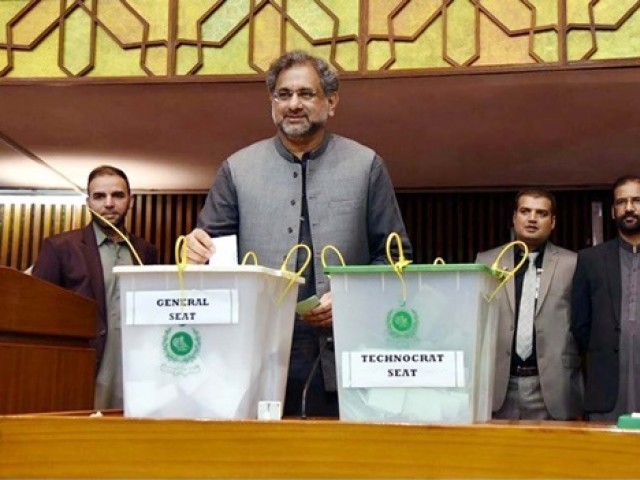 ISLAMABAD / LAHORE / KARACHI / QUETTA: The ruling Pakistan Muslim League-Nawaz (PML-N) gained control of parliament’s upper house in a secret ballot on Saturday, after its backed ‘independent candidates’ won 15 of the 52 seats up for grabs in today’s elections.

Working with allied parties in the Senate, PML-N should have de facto control of the 104-seat house.

The results of the Federally Administered Tribal Areas (Fata) were the first to come out. As many as 25 candidates contested for the four Senate seats from Fata.

Four candidates who won the Senate elections from Fata, according to unofficial sources, include Hidayatullah, Hilalur Rehman, Shamim Afridi and Mirza Mohammad Afridi.

According to initial results, out of 12 Punjab Senate seats, PML-N won 11 seats from the Punjab Assembly.

Following is a graphical representation of the current and previous position of the Senate, prior to and after the Supreme Court of Pakistan’s ruling, which disqualified former premier Nawaz Sharif as the party’s chief.

The Pakistan Peoples Party has so far won 10 seats out of the 12 seats from Sindh.

The Muttahida Qaumi Movement-Pakistan (MQM-P) suffered the most following rifts within its ranks as it could only manage to bag only one seat from the Sindh Assembly.

One senator from the JUI-F Molvi Faiz Mohammad made it to the list of Senators from Balochistan.

Polling for the 52 seats in Senate concluded in the national and provincial assemblies at 4pm on Saturday.

Elections to the Senate were held in accordance with Article 59 of the Constitution. Each provincial assembly elects 23 members respectively. These include 14 general, four technocrat, four women and two non-Muslim seats. Four – two general, one technocrat and one woman are elected from Islamabad Capital Territory (ICT). Eight members are elected from the Federally Administered Tribal Areas (FATA).

House of federation: What does the Senate do?

Elections for 52 Senate seats were held. Separately, two seats have been lying vacant. Mushahid Hussain, elected on a Pakistan Muslim League-Quaid (PML-Q) ticket in 2012, recently tendered his resignation after switching allegiance to the Pakistan Muslim League-Nawaz (PML-N). Hussain, whose term was set to expire next month, is in the race for a new Senate seat. Saifullah Bangash, a Pakistan Peoples Party senator, died recently. His term was also expiring next month.

The following list shows senators elected by party and region

358 votes have been casted in the Punjab Assembly while a few voters were still inside the balloting hall when the polling ended at 4.

Pakistan Muslim League-Nawaz (PML-N) MPA Malik Muhammad Iqbal Channar was the first one to cast his vote for the 12 Senate seats for Punjab.

Punjab Law Minister Rana Sanaullah was the second to cast his vote.

The situation in the Punjab Assembly grew tense after PTI members accused the government of rigging the polling, Express News reported.

Members complained to the presiding officer (PO) of governmental officers allegedly inserting empty papers into the ballot box as opposed to votes. They further claimed that voters following them were doing the same.

PTI workers urged the PO to halt the voting and search the ballot box but the request was dismissed.

PTI MPA Shoaib Siddiqui, while addressing the media, said that under the leadership of provincial law minister Rana Sanaullah, government officials were rigging the polls. “We reached out to the PO, but it [our request] fell on deaf ears.” 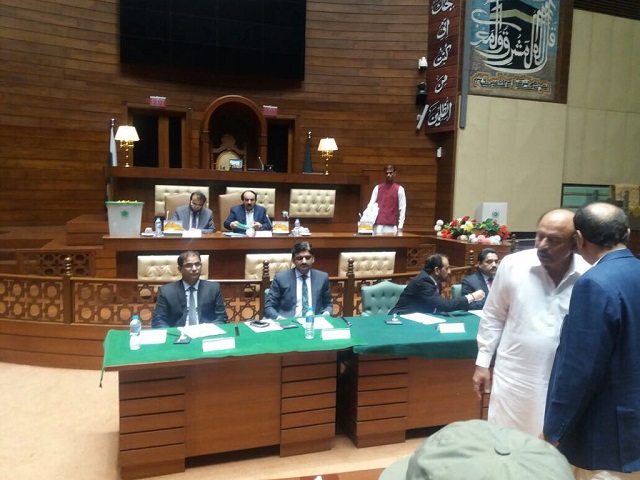 So far, 161 votes have have been cast in the Sindh Assembly to elect 12 senators from Sindh.

Strict security measures were put in place within and outside the assembly premises with heavy contingents of Rangers and police deployed.

Usage of cell phones was also banned in the house and around 800 ballot papers have been published for all categories.

Not only lawmakers, but leaders of different political parties including PPP, MQM-P PTI, PSP have reached the assembly to witness the election process.

Sharjeel Memon had also reached the Sindh Assembly to cast his vote. Earlier, speaker Sindh Assembly had written a letter to jail authorities to produce Memon so that he could cast the vote.

“There was dinner at CM House where all MPAs were invited. No one should raise any objection if MQM MPAs also attended it,” he said after news of MQM legislators meeting with PPP leaders emerged on Friday.

Accredited journalists covering the Senate election protested in Sindh Assembly premises after they were not allowed to report live from the press gallery. Reporters staged a sit-in in the assembly parking area. 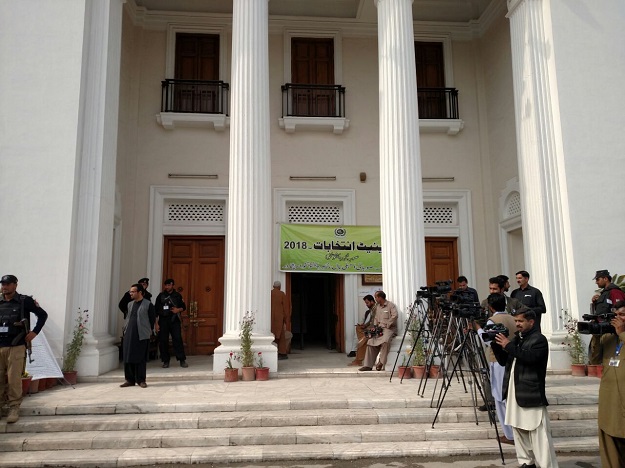 Balloting ended in the K-P Assembly as all122 registered voters casted their votes.

Jamaat-e-Islami (JI) lawmaker Muhammad Ali was the last person to cast his vote.

The K-P Chief Minister Pervez Khattak expressed satisfaction over the arrangements made by the ECP for the election.

“I will definitely obey the set rules of the ECP and will take off my jacket and shoes if they ask for it,” Khattak said.

He also accused PPP of horse trading saying that the party has few votes but fielded three candidates.

“We have 67 votes and we are contesting for four general seats and one each for the seat of technocrats and women. While PPP has five votes and three candidates.”

Former minister for mines and minerals development Ziaullah Afridi was the first to cast his vote when the polling kicked off at 9am.

Everything in possession of the voters including cell phones, watches, rings and bags were taken from them before they were handed the ballot papers.

A group of polling agents, from both the opposition and treasury benches, checked ECP stamps on the back of every ballot paper before voting.

Lawmakers were irked by the ECP staff asking them to take off their jackets and coats for frisking which lead to a few scuffles.

Even K-P Speaker Asad Qaiser was searched and was asked to take off his coat before proceeding towards the polling booth.

PTI lawmaker Fazle Ilahi also got into a verbal spat with the ECP staff and polling agents.

The Peshawar High Court had on Friday had observed that Senate elections could not take place in the provincial assembly unless Baldev Kumar took oath as member of the house.

However, despite the court’s orders, Baldev Kumar was neither present in the house for voting nor was he added to the list of voters. 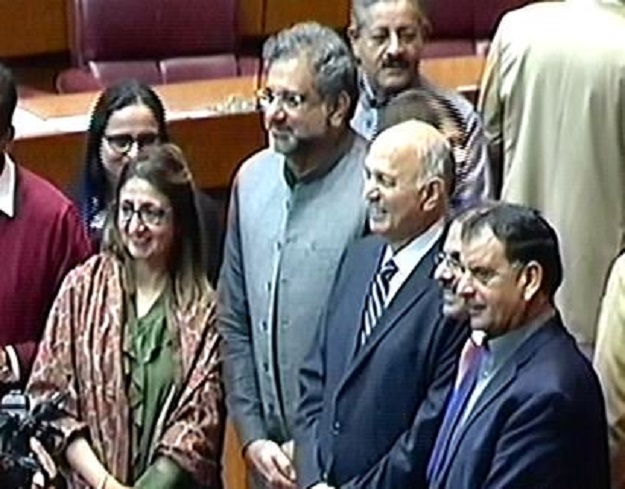 NA Speaker Sardar Ayaz Sadiq was the first to cast his vote. 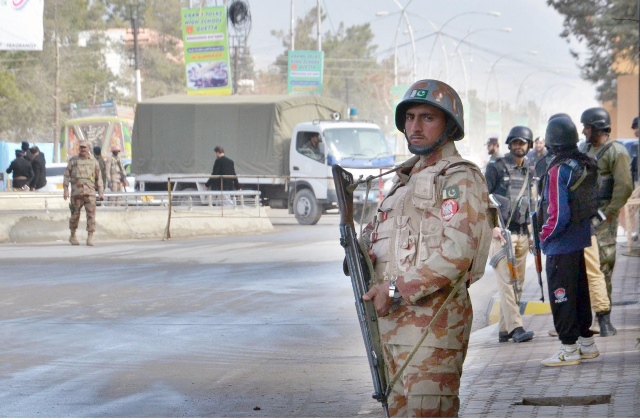 All 64 votes for the 11 Senate seats were cast in the Balochistan Assembly as the voting came to an end.

The assembly had to earlier cast 65 votes but after the ECP’s decision to de-seat Mazoor Khan Kakar the assembly will not cast 64 votes.

Earlier speaking to the media, Minister of State for Information and Broadcasting Marriyum Aurangzeb said today marks a historic day for Pakistan as the Senate elections are being held on time.

Marriyum further said that she’s appalled by the court’s decision to not let Nawaz Sharif head the party.

Marriyum reiterated that Nawaz will win every election he contests and the nation will support him through and through. 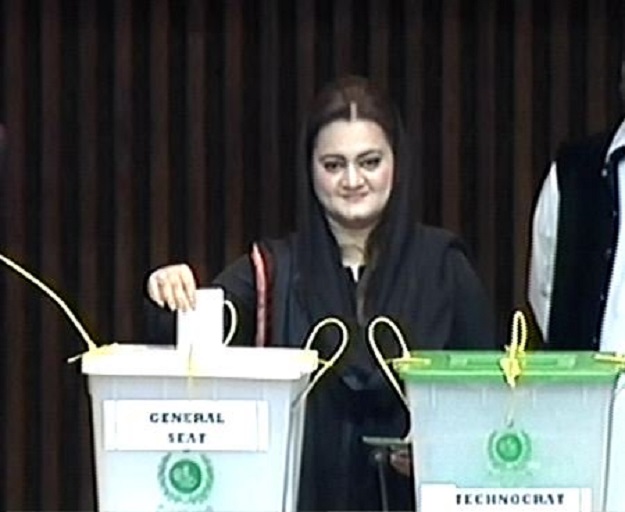 Commenting on Imran Khan, Marriyum said that PTI workers will not vote for their own party and Imran is yet to respond to fake NOC that he produced over the construction of his residence in Bani Gala.

She further added saying that the PTI chief must stop accusing the ruling party of horse trading.

Meanwhile, Pakistan Peoples Party (PPP) Chairperson Bilawal Bhutto Zardari in a tweet congratulated the democrats and shared that the ongoing Senate elections are a step forward for Pakistan’s ‘young democracy’.

He further said that the PPP has put forward its best candidates and wished them best of luck for the results.

Congratulations to all democrats. Another step forward for Pakistan’s young democracy, Senate elections taking place despite conspiracy theories. #PPP has put forward the best candidates. Wishing them best of luck.

The PTI chief Imran Khan did not appear in the National Assembly to cast his vote.

Taking a jibe at the PTI chief, Jamiat Ulema-e-Islam chief Maulana Fazlur Rehman stated that when has Imran Khan ever shown up to parliament.