All of this is being done to create the office of a super prime minist­er
By AFP
Published: March 2, 2018
Tweet Email 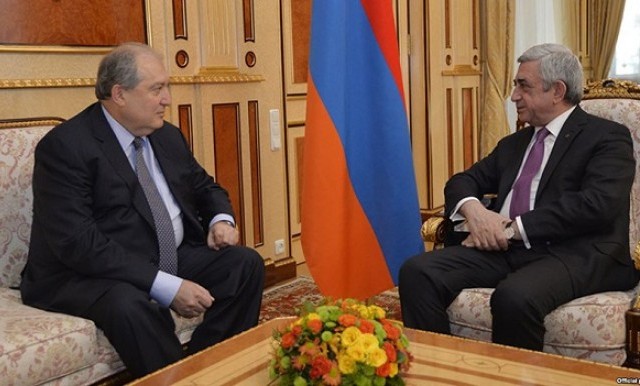 YEREVAN: Armenian lawmakers elected Friday a largely figurehead president to succeed Serzh Sarkisian as he seeks to extend his grip on power under a new parliamentary system of government.

The ambassador to the United Kingdom, Armen Sarkisian — who is no relation to the current leader — garnered 90 votes in the 105-seat legislature, and will assume presidential duties after his predecessor steps down later this month.

The political shift comes after President Sarkisian in 2015 initiated controversial constitutional amendments to turn the impoverished Moscow-allied country into a parliamentary republic with a powerful prime minister.

Opponents of the 63-year-old leader — whose second and final term in office ends on April 9 — say the reforms have been designed to increase his power, albeit in a new capacity as premier.

The sole candidate for the mostly ceremonial presidential post, Sarkisian was hand-picked by the president and nominated by the ruling Republican Party. The 64-year-old professor of physics briefly served as prime minister in the 1990s.

“Serzh Sarkisian wants to stay at the helm,” political analyst Stefan Safarian told AFP, suggesting that the leader’s ambition is to take on the prime ministerial post after stepping down as president.

The new head of government — who will also serve as the nation’s commander-in-chief — will be nominated by the ruling party and appointed by the president.

Elected by the National Assembly for a single term of seven years instead of the current five, the president will be expected to mainly rubber-stamp the prime minister’s decisions. According to recent amendments to legislation, he will not be part of the country’s Security Council.

Pro-Moscow Serzh Sarkisian — who already served as premier in 2007-2008 — did not explicitly deny or confirm plans to become a prime minister again. But in an interview with AFP last year, he vowed to “remain active” after leaving office and hinted that he would continue to influence Armenia’s politics as leader of the Republican Party.

The ruling party has defended the controversial reform as a move aimed at consolidating the ex-Soviet nation’s democracy and improving the balance between the legislative and executive branches of power.

“Democracy means distribution of powers, strengthening different political forces, parliamentary control over the government and that’s what the reform is about,” party spokesman and parliament vice-president Eduard Sharmazanov told AFP.

“The opposition will get more levers to influence political processes. We are moving towards a more democratic form of governance,” he added. Many hold out little hope that the election will change their lives for the better.

“Nothing will change,” Iveta Mnatsakanyan, 65, told AFP. She described the presidential candidate as a “very intelligent” person who lived in Britain for a long time.

“I am sure he is not fully aware of the country’s difficult moral, social and economic situation and just how corrupt the elites are. He will not be able to influence things for sure,” she added.

The constitutional amendments — which enter into force after Serzh Sarkisian steps down — were passed after a referendum in December 2015, with some 63 per cent of the voters backing the changes. But the opposition complained of widespread violations at polling stations, prompting thousands to rally in protest.

Council of Europe observers have said the referendum was marred by allegations of large-scale vote buying and multiple voting, among other irregularities.

A shrewd former military officer, Serzh Sarkisian has been in charge of the landlocked South Caucasus nation of 2.9 million since winning a vote in 2008. After that poll, 10 people died in bloody clashes between police and supporters of the defeated opposition candidate.