The rise of Pakistan in the global meat trade

The rise of Pakistan in the global meat trade

The halal food market, is one of the larges­t opport­unitie­s in the food and agribu­siness sector global­ly availa­ble.
By Farooq Tirmizi
Published: May 9, 2011
Tweet Email 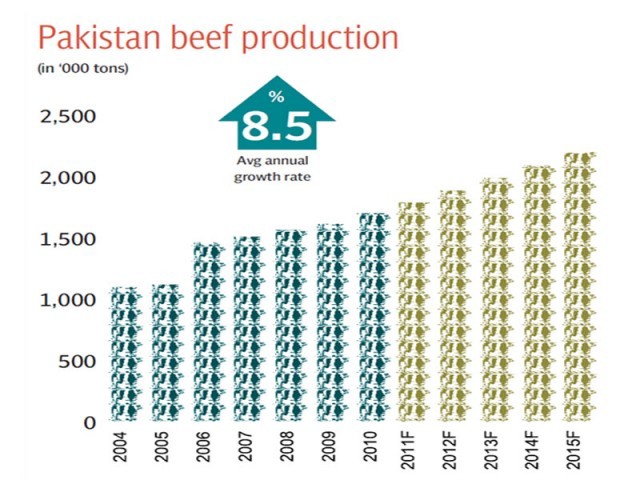 The halal food market, is one of the largest opportunities in the food and agribusiness sector globally available for Pakistani companies.

Pakistan has begun taking the tentative first steps towards becoming a major international player in an industry in which the country has a strong competitive advantage: the global red meat trade.

At a time when Pakistani businessmen have a hard time selling even high-quality products to foreign customers due to Pakistan’s negative country brand, meat processing companies report customers practically begging for Pakistani red meat to be exported to countries in the Middle East and Southeast Asia.

While Pakistan has extraordinary natural strengths, the country also faces massive infrastructure shortcomings which handicap the ability of many Pakistani businesses to effectively compete against firms from Australia, Brazil or even India.

Yet over the last few years, a new breed of Pakistani companies seems to be emerging, one that confronts the unique challenges of agribusiness in the country and seems to be determined to take on its global competitors.

“If we can’t compete in agriculture, then we should really just give up trying to do anything,” says Kazim Namazi, a partner at ASI Partners, a Karachi-based consulting firm that advises agribusinesses.

Size of the opportunity

The halal food market, at just over $640 billion a year worldwide, is one of the largest opportunities in the food and agribusiness sector. It is also one that plays to the unique advantages of being based out of Pakistan.

Halal meat is also one of the fastest growing segments within the global food trade. Between 2001 and 2009, the global beef trade grew at an average of 10.4 per cent to reach just over $30 billion, according to data available from the UN Food and Agriculture Organisation (FAO). However, the market for halal beef imports in the Middle East and Southeast Asia alone grew by over 18.2 per cent to reach just under $2 billion a year during that same period.

Pakistan’s market share within this rapidly growing market is a paltry 2.9 per cent. However, Pakistani exporters seem to be determined to make up for lost time. In the six years ending in 2009, Pakistani red meat exports have risen by an average of 68.6 per cent a year, though admittedly from a very low base.

Yet with the advent of more and more new players, and with surprisingly robust support from the government, Pakistan is on the verge of becoming one of the largest players in the meat trade, at least within the Middle East and Southeast Asia.

Perhaps the single biggest advantage that Pakistan has is proximity. The country is closer to the Middle East than any of its biggest rivals in the market. The three countries with the largest market shares are Australia, Brazil and India, each of which has considerably higher shipping costs to these export markets compared to Pakistan.

Brazil is particularly dominant in beef, accounting for as much as 39 per cent of the region’s beef imports. It absolutely dominates the meat market in Iran, with a share of 99 per cent in 2009. Yet, as Namazi points out, there is virtually no difference between Brazilian meat and Pakistani meat.

“The Brazilian animal is exactly the same as most of our breeds of cattle. The quality of meat is also the same. The only difference is their ability to market their meat better than us,” said Namazi. He argues that Pakistan can easily displace Brazil as the Middle East’s leading meat supplier.

Iran, in particular, seems to be keen for Pakistani beef. The Iranian government has invested 50 per cent of the capital in the Lahore Meat Company, a dedicated abattoir that will export meat to Iran.

Australian beef, with a powerful branding effort and a larger source animal, has a specific niche market that industry experts believe will be difficult for Pakistan to compete with in the medium term.

India, the one country that could completely destroy Pakistan’s potential in the meat trade, has placed itself outside the global beef market after a 2005 Indian Supreme Court ruling that upheld a ban on cow slaughter as constitutional.

Indian exporters only sell carabeef – meat from buffalo – which is considered inferior and commands lower prices and margins. Nevertheless, Indian exporters dominate the market in Malaysia for the lower end of beef, while Australians command the higher end.

“Malaysia is ripe for a middle-market meat supplier from Pakistan,” said another expert in the meat business. Malaysia has had a free-trade agreement with Pakistan since 2007.

Pakistanis in the business

Several companies from Pakistan have entered the red meat export business and even more are in the process of entering the market. The oldest and one of the most successful of these is PK Livestock, a Karachi-based abattoir which has been exporting red meat to the Middle East for over two decades.

Zenith, a Lahore-based exporter, became the first Pakistani company to sell beef to Malaysia, after the Malaysian government relaxed its regulatory requirements for Pakistani exporters.

Others, such as OMC and the Al Shaheer Corporation, have also successfully begun exporting to the Middle East and are aggressively seeking regulatory approvals for markets further afield in Southeast Asia.

Pakistan’s total meat exports may come close to $100 million in 2011 and could surpass the $500 million mark in about five years, according to projections by ASI Partners.

Yet for all their successes, Pakistani meat exporters are severely handicapped compared to their Brazilian, Australian and even Indian competitors.

Despite having the eighth largest herd of cattle and the third largest herd of goats in the world, Pakistan’s animal population is very scattered, which makes procurement of the animals for the abattoir expensive.

But perhaps the single biggest challenge is regulatory: meat importing nations have strict health codes for the safety of the meat, including a requirement to be able to trace the meat of any diseased animal down to the exact location that it came from, so that the entire herd it was a part of can be slaughtered. This traceability is something that Pakistani herds lack, because the government has not yet invested in tracking and cataloguing the country’s animal population.

To their credit, the provincial governments of Punjab and Sindh have been actively promoting the livestock sector. Given the fact that the sector employs 17 per cent of the country’s workforce, an effort to improve the productivity and marketability of the industry’s products is a welcome attempt to help improve the incomes of some of the most vulnerable Pakistanis.