'What we make of it': Labour's Corbyn to outline Brexit vision Monday

'What we make of it': Labour's Corbyn to outline Brexit vision Monday 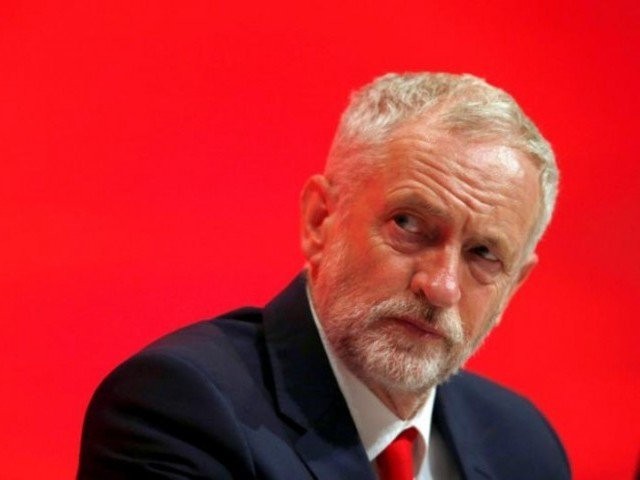 LONDON: Opposition Labour leader Jeremy Corbyn will on Monday call for Britain to keep tariff-free access to the EU after Brexit, arguing that withdrawal from the bloc is “what we make of it”, according to excerpts of his speech..

Corbyn will call for “a bespoke relationship” with the European Union that appears to mirror the bloc’s current customs union but with agreed opt-outs.

“Labour would negotiate a new and strong relationship with the single market that includes full tariff-free access and a floor under existing rights, standards and protections,” he is to say in the speech.

“We would also seek to negotiate protections, clarifications or exemptions, where necessary, in relation to privatisation and public service competition directives, state aid and procurement rules and the posted workers directive.”

In the much-anticipated address, the opposition leader will try to bridge Labour’s divide between its working-class base, which voted largely to leave the EU, and more metropolitan supporters of the bloc, including many lawmakers.

More than 80 senior figures from across the Labour party signed a statement published over the weekend urging Corbyn to keep Britain in the single market.

“The truth is more down to earth and it’s in our hands: Brexit is what we make of it together.”

On Sunday, Labour’s Brexit spokesperson Keir Starmer said the party could back an amendment by Conservative rebels to force the country to become part of a customs union, a move that could threaten Prime Minister Theresa May’s government.

He warned May that “crunch time is coming” over her plans, which she will outline in a speech Friday after her Brexit cabinet agreed key details last week.

She has repeatedly said Britain would not remain in an EU customs union.

May only holds on to power through the additional support of Northern Ireland’s 10 Democratic Unionist Party lawmakers in parliament.

Her government could be brought down if enough of her Conservative MPs team up with opposition parties to demand that she pursues a post-Brexit customs union.

EU supporters back a form of union, which would retain tariff-free access to the continental market, alongside aligning tariffs charged on goods imported from the rest of the world.

“Obviously it’s the only way realistically to get tariff-free access, it’s really important for our manufacturing base,” Starmer told the BBC.
But trade minister Liam Fox, an arch eurosceptic, later told the same BBC programme that Britain had to be able to set its own trade policy with the rest of the world on leaving the EU in March 2019.

“The key thing about a customs union is that it puts a big frontier around Europe,” he said.

“I want the United Kingdom to make its own decisions. We want to be rule-makers in our own country and not rule-takers.”
May this week brought together her key ministers to thrash out Britain’s negotiating stance.

Reports following the meeting indicate it will seek to align itself with EU rules in certain sectors of the economy, but will retain the right to diverge.

EU President Donald Tusk has dismissed the reported plans as “based on pure illusion”.