Pengui­n Random House publis­hers' called Mrs. Obama one of most iconic and compel­ling women of our era
By AFP
Published: February 26, 2018
Tweet Email 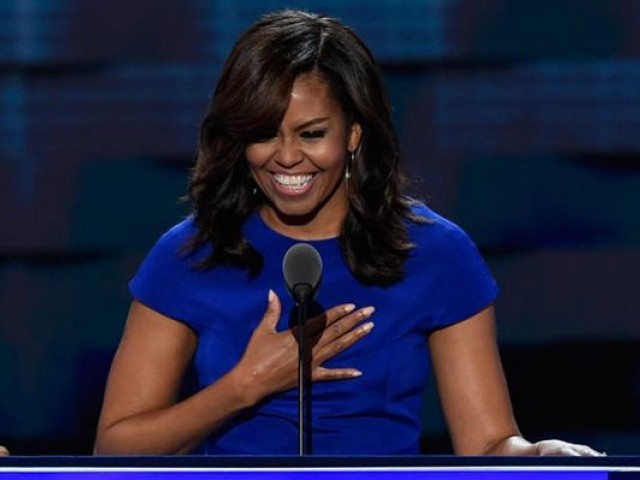 WASHINGTON: A much-awaited memoir by former first lady Michelle Obama will be published in North America on November 13 and will appear simultaneously in 24 languages worldwide.

In making the announcement Sunday, Penguin Random House publishers’ chief executive Markus Dohle called Obama “one of the most iconic and compelling women of our era.”

In an unusual gesture, one million copies are to be donated in the Obama family’s name to “children in need,” the publisher’s statement said.

“I talk about my roots and how a girl from the South Side found her voice. I hope my journey inspires readers to find the courage to become whoever they aspire to be.”

Having grown up in a modest Chicago neighborhood, Obama defied a teacher’s advice that she was “setting (her) sights too high,” applying and getting accepted into Princeton University, then earning a Harvard Law School degree.

She met Barack Obama while he was an intern and she his adviser at a Chicago law firm, and they were soon married. She became his closest confidante during his political rise.

At the White House, under a sometimes-harsh spotlight, she advocated for the rights of women and girls and campaigned for Americans to live healthier lives.

The publisher’s announcement describes “Becoming” as “an unusually intimate reckoning from a woman of soul and substance who has steadily defied expectations.”

It said Obama would embark on an international book tour when “Becoming” comes out, with details to be announced.

The former first couple last year negotiated a deal with Penguin Random House, reportedly worth more than $60 million, for books by both Obamas.

That amount would be the highest ever paid for books by former presidents or their spouses.

The release is certain to attract very high interest, and sales.

“Becoming” will be released in the US and Canada by Crown Publishing Group, a division of Penguin Random House, and in Britain by Viking, a Penguin imprint. It will also appear in audio format, read by the author.

Obama’s only previous book — “American Grown,” about the White House garden — was published in 2013.

Israel’s Netanyahu to be questioned over ‘graft’