US to open Jerusalem embassy in May for Israel's 70th anniversary

US to open Jerusalem embassy in May for Israel's 70th anniversary 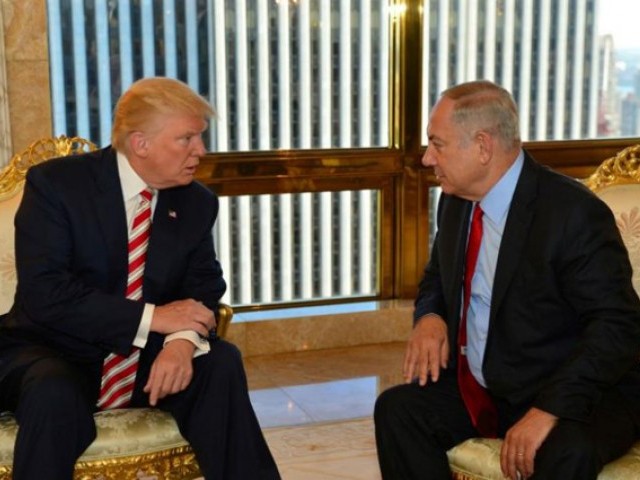 WASHINGTON: The United States said Friday it will relocate its embassy in Israel to Jerusalem in May, bringing forward the contested move to coincide with the Jewish state’s 70th birthday – and enraging Palestinians, who called it a “blatant provocation.”

Palestinians object to recognition of the disputed city as Israel’s capital and say the embassy move could destroy a two-state solution to the decades-old Middle East conflict.

Palestinians also object to the date chosen for the embassy move – they call May 14, on which Israel declared independence in 1948, Naqba, their “day of catastrophe.”

US expected to open embassy in Jerusalem in May

Israeli Prime Minister Benjamin Netanyahu welcomed the announcement and thanked US President Donald Trump for his ‘leadership’ and his ‘friendship.’

The embassy move is expected to complicate efforts to restart peace talks between the Israelis and Palestinians – and jeopardize the traditional, if disputed, US role as an “honest broker” in efforts to resolve one of the world’s most intractable conflicts.

“In May, the United States plans to open a new US embassy in Jerusalem. The opening will coincide with Israel’s 70th anniversary,” State Department spokesperson Heather Nauert in a statement.

Until now, the US embassy has been located in Tel Aviv with a separate consulate general located in Jerusalem that represents US interests in the Palestinian territories.

The new embassy will be initially located in a US consular building in Jerusalem’s Arnona neighborhood while Washington searches for a permanent location, “the planning and construction of which will be a longer-term undertaking,” Nauert said.

The interim embassy will contain office space for the ambassador and “a small staff,” she said.

“By the end of next year, we intend to open a new embassy Jerusalem annex on the Arnona compound that will provide the ambassador and his team with expanded interim office space,” she added.

Trump broke with decades of policy in December to announce US recognition of Jerusalem as Israel’s capital and a pledge to move the embassy, drawing near global condemnation, enraging the

Palestinians and sparking days of unrest in the Palestinian territories.
It ruptured generations of international consensus that Jerusalem’s status should be settled as part of a two-state peace deal between Israel and the Palestinians.

The Palestine Liberation Organization immediately decried Washington’s embassy announcement as a “provocation to all Arabs.”

“The American administration’s decisions to recognize Jerusalem as Israel’s capital and choose the Palestinian people’s Naqba as the date for this step is a blatant violation of international law,” PLO number two Saeb Erekat told AFP.

He said the result would be “the destruction of the two-state option, as well as a blatant provocation to all Arabs and Muslims.”
Israel follows the Jewish lunar calendar, so this year’s official independence celebration falls on April 19.

“It will turn Israel’s 70th Independence Day into an even greater national celebration,” said Netanyahu, whose right-wing government is facing an uncertain future due to corruption allegations and police inquiries facing the prime minister.

Israel claims all of Jerusalem as its capital, while the Palestinians see the eastern sector as the capital of their future state.

Trump said his recognition of Jerusalem – making good on a 2016 campaign pledge – marked the start of a “new approach” to solving the Israeli-Palestinian conflict.

Israelis and Palestinians alike have seen his move as Washington taking Israel’s side in the conflict – a view reinforced by the White House’s recent decision to withhold financing for the UN agency for Palestinian refugees.

Palestinian leader Mahmud Abbas this week travelled to the United Nations to call for an international conference by mid-2018 in which the United States would not have the central mediating role in launching a wider peace process.

While the Palestinians want a new international mechanism to shepherd peace talks, the details of the Trump plan and its timing are still unclear.

The revised schedule on the embassy move comes after US Vice President Mike Pence pledged only last month to move the embassy by the end of 2019 in a speech to Israel’s parliament that saw Arab lawmakers expelled after they shouted in protest.

“The hardest deal to make of any kind is between the Israelis and Palestinians,” Trump told reporters Friday at the White House.
“We’re actually making great headway. Jerusalem was the right thing to do.”

The Palestinian leadership on Friday slammed a US decision to open its embassy in Jerusalem in May, coinciding with the 70th anniversary of Israel’s independence, as “a provocation to Arabs”.

The founding of Israel seven decades ago on May 14 1948 is mourned by Palestinians as the Nakba, or “catastrophe” when an estimated 750,000 Palestinians either fled or were expelled from their homes in the war surrounding Israel’s creation.

“The American administration’s decisions to recognise Jerusalem as Israel’s capital and choose the Palestinian people’s Nakba as the date for this step is a blatant violation of international law,” Palestine Liberation Organisation (PLO) number two Saeb Erekat told AFP.
He said the result would be “the destruction of the two state option, as well as a blatant provocation to all Arabs and Muslims.”

“I would like to congratulate Donald Trump, the President of the US on his decision to transfer the US Embassy to our capital on Israel’s 70th Independence Day,” he wrote in English on his Twitter account.
“There is no greater gift than that! The most just and correct move. Thanks friend!”

US President Donald Trump in December broke with decades of policy in Washington by officially recognising Jerusalem as Israel’s capital and pledging to move the American embassy from Tel Aviv.
Since that declaration 27 Palestinians and two Israelis have been killed in violence. Arab and Muslim leaders have warned that there could be a further escalation if the embassy is moved.

The Palestinians claim east Jerusalem, captured by Israel in the 1967 Six Day war, as the capital of the state to which they aspire.
Israel claims all of Jerusalem as its capital.

There is a broad international consensus that the dispute must be resolved as part of a two-state peace deal between Israel and the Palestinians. Embassies in Israel are therefore in Tel Aviv, not in Jerusalem.

The US state department said that ambassador David Friedman would initially work out of the large US Consulate General in the Arnona neighbourhood of Jerusalem, situated between the east and west sides of the city.

Eventually a permanent embassy building would be constructed, it said. The relatively new consulate complex, on the edge of Jerusalem adjacent to Jewish and Palestinian residential neighbourhoods, could pose potential challenges to US and Israeli security personnel.