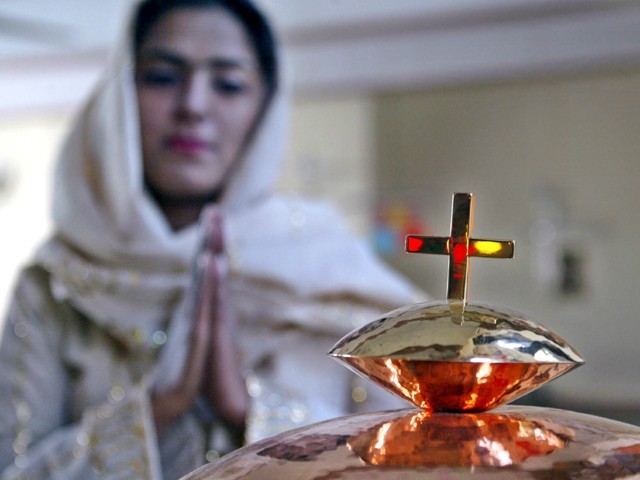 Aim is to safeguard the interest of minority students, their identity, beliefs and citizenship PHOTO: EPA

LAHORE: Pakistan Muslim League-Nawaz (PML-N) has proposed a five percent quota for minorities to provide them equal opportunities in the ‘admission policy’ of higher education institutions. This was submitted in the form of a bill in the Punjab Assembly.

Also, the inclusion of two members belonging to religious minorities was suggested in a separate amendment bill so they could contribute to syllabus building and course content development. The aim is to safeguard the interest of minority students, their identity, beliefs and citizenship.

PMLN’s Hina Pervez Butt, in her first Bill, proposed, “It shall be made compulsory for all institutions in Punjab imparting higher education at the college, vocational and professional levels to ensure allocation of 5 % of the total seats/ admissions to students belonging to the minority communities. This act shall extend to every public and private educational institution of higher education (including all colleges, universities and professional institutions).

The Higher Education Commission (HEC) shall be tasked to monitor and ensure the allocation of reserved seats for students belonging to minority communities and shall have the authority to make such rules, if any as it may deem necessary for carrying out the purposes of this act.

The bill is being introduced in line with the National and International Commitments of Government of Pakistan including Article 36 and 37 of the Constitution to safeguard the legitimate rights and interests of religious minorities and promotion of social justice.

Meanwhile, another amendment bill was also submitted by Hina Pervez Butt. It proposed inserting a clause (n) in Subsection 5 of Section 3 of the Punjab Curriculum and Textbook Board Act 2015. The clause (n) states “Two members belonging to religious minority community. who are academicians or professionals having known expertise relating to curricula or textbooks development, [will be included]”.

The reason for amending the bill is “Pursuant to the constitutional provisions of safeguarding of minority interests and their due representation as stated in Article 36.” The bill is aimed at mainstreaming the minority community through effective representation at institutional level and to allow effective representation of minorities to contribute to the exercise of syllabus building and course content development. Students of minority communities are taught the same syllabus as their counterparts this bill aims to ensure that interests of such students vis a vis their identity, beliefs and citizenships are safeguarded.

Talking to The Express Tribune, Hina Pervez Butt said that this is the first time they are proposing a 5% quota for minorities so they could be given opportunities in higher education. She said PML-N also proposed an amendment in the Punjab Curriculum and Textbook Board Act 2015 in which they suggested the inclusion of two members belonging to religious minorities so that they could contribute to introducing those heroes who belonged to minorities in the syllabus for minority students.

Opposition MPA for minorities, Shunila Ruth, welcomed the bill submitted in PA, adding the quota should be increased to 10%. She said the amendment bill is also admirable, adding she had been demanding the same in her speeches in the Punjab Assembly. Hina said the heroes who contributed to the religions of minorities should be taught in the syllabus of practicing students. She hoped the religious content of minorities will also be suggested by those two members helping to create the syllabus in a similar way to the addition of religious content for Muslim students.

Public health: ‘Govt will not tolerate any negligence’