Court observ­es it is too early to decide on the matter­
By Rana Yasif
Published: February 21, 2018
Tweet Email 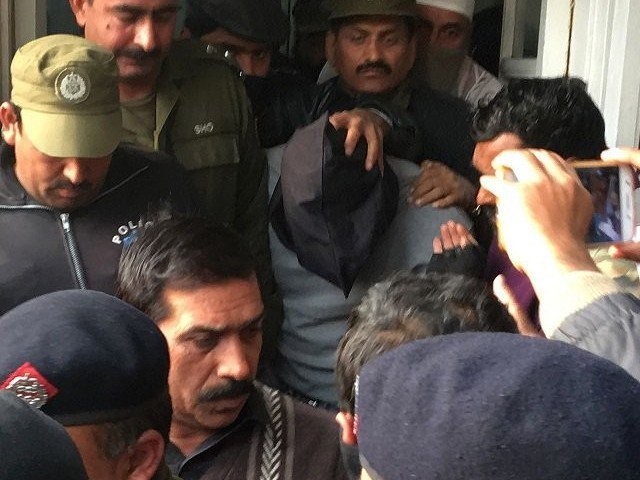 Policemen escort the suspect accused of raping and murdering a young girl as they leave an anti-terrorist court in Lahore on January 24, 2018. PHOTO: AFP

LAHORE: The Lahore High Court disposed on Wednesday a petition seeking  public hanging of the main accused in the rape and murder case of Kasur’s Zainab.

The court observed that it was too early to decide on the matter while the convict has a forum to file an appeal against the Anti-Terrorism Court’s (ATC) verdict that awarded him death sentence on four counts, life imprisonment, seven-year jail term and imposed total fine of Rs3.1 million and Rs1million compensation to the legal heir of the deceased.

Earlier today, representatives of all four provinces and the Council of Islamic Ideology in the Senate Standing Committee rejected the bill for amendment in the Constitution for the public hanging of the accused in kidnapping and abduction of children below the age of 14.

The bill, proposed by Senator Rehman Malik, was discussed for the second time during a meeting of the Senate’s Standing Committee on Law and Justice where representatives of all four provincial home miniseries unanimously opposed the legislation.

On Tuesday, the murderer and rapist of the seven-year-old Zainab Imran Ali challenged the ATC verdict in the LHC.

In his appeal, the convict has contended that he is not guilty and claimed that the trial was conducted in haste and legal requirements which needed to be fulfilled were fully ignored. He appealed the court to overturn the ATC’s verdict.