Who will keep Asma’s flame burning?

Who will keep Asma’s flame burning?

She was not afraid of anyone - she could snub, silenc­e and vanqui­sh anyone who dared to cross her path
By Anjum Niaz
Published: February 18, 2018
Tweet Email 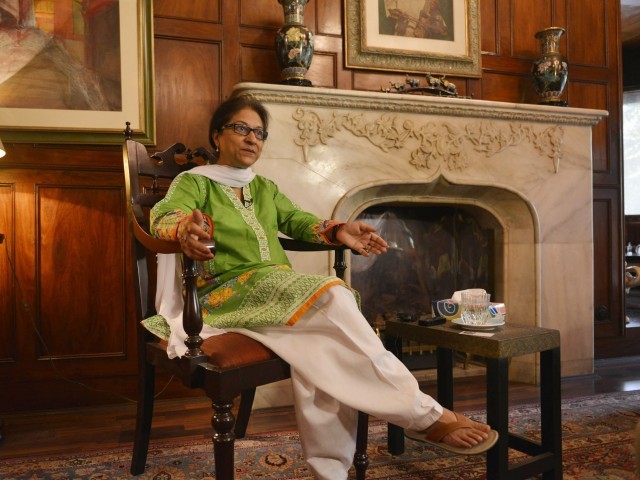 Who will pick up Asma Jahangir’s torch and run with it? Who will keep her flame burning? Only the brave, bold and courageous will fight for human rights of voiceless Pakistanis left in the dark; Only those with a conscience will confront the corrupt elite. Few, if any will have the spine to resist the cruel, religious obscurantists and inhuman forces whose merciless grip on Pakistan continues. Asma’s iconic career touched and inspired many souls, but the question now is: Who will follow in her footsteps? It’s a huge challenge. Her comrade-in-arms I A Rehman hopes that many young men and women Asma inspired, trained and worked, will step forward.

After the 2005 earthquake that devastated Pakistan, Asma Jahangir arrived in New York to talk about the calamity at the premier Asia Society. Rabia, a student of Barnard College — Columbia University, accompanied me to the talk. The Pakistan Society at her college had raised a sizeable sum to donate to the earthquake victims back home. Asia Society was headed by an Indian woman. As expected the auditorium was packed, mostly with the Indian community, come to hear the great Pakistani human-rights activist. They were not disappointed. But I was. Being critical of our armed forces on a foreign platform (especially a hostile one) for the shoddy work they were doing in the aftermath of the earthquake was not okay for me. During the question/answer session I stood up to ask Asma: Was it therefore not more important for her to stay back and help out instead of coming to the US? She silenced me in a second. So I sat down. Her snub appeared to have pleased the audience as a ripple of laughter rang out.

A couple of months down the road, as I sat at the home of my former editor (a great guy) for dinner surrounded by many senior media people, including the Indian journalist Kuldip Nayar, I related the incident. Even before I could finish my story, one of them whipped out his cell phone and dialled Asma to tell her she needed to come immediately. The rest of the media heavyweights, including the hostess, were angry why I had brought up the subject. Anyway, my husband gestured to me that we had overstayed our welcome and it was time to leave. On the way home, it hit me that those who adore Asma will not brook any critical comment against her. Such is their idolisation for this brave woman. But here’s my question for them: will anyone of them, still holding cushy journalism jobs and drawing princely salaries, be willing to play even a fraction of the part played by Asma Jahangir during her decades of struggle against the forces of evil — civil, military and religious? Would anyone of these armchair analysts be willing to go out on the streets at the risk of being beaten, jailed or even killed?

Let’s ask these paper and TV tigers if they have the guts to take on the religious right? When an honour killing occurs, which is so often, or when a woman, child is raped, humiliated before the whole community by a gang of powerful people, will they have the courage to come out and side with the victim? Asma was always there to be their voice. She was not afraid of anyone. She could snub, silence and vanquish anyone who dared to cross her path, as I learnt much to my embarrassment. I thought as a journalist it was my right to ask her questions she may not agree with. I watched many of her talk shows on TV where she would get entangled with the other guest speakers. Guess who came out the winner? Asma Jahangir! And therein lay her power that she harnessed to repel her adversaries; that made her extraordinary.