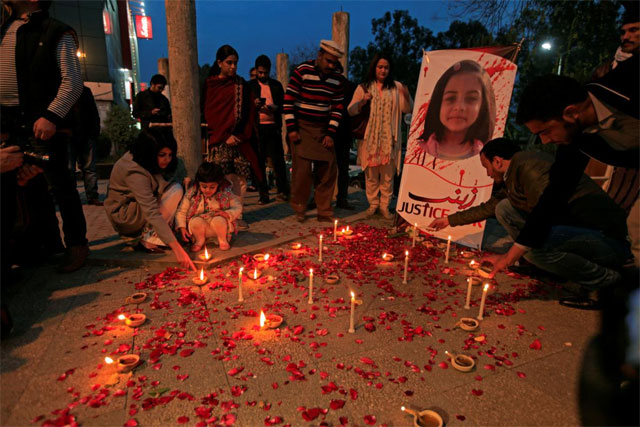 The prosecution counsel said that his team has brought the culprit to justice. PHOTO: REUTERS

LAHORE: Conducting the swiftest trial of Pakistan’s history, an anti-terrorism court (ATC) on Saturday awarded four death penalties to Imran Ali – the man who was identified through the DNA test as being behind the abduction, rape and murder of Kasur’s 7-year-old Zainab.

The ATC also sentenced him to life imprisonment and a separate 7-year term, while also imposing on a fine of Rs3.1 million. He will also have to pay Rs1million as compensation to Zainab’s family.

The court issued this order after swiftly concluding Ali’s trial at Lahore’s Kot Lakhpat Jail within just one-week, in accordance with an order of the Lahore High Court (LHC).

Ali was also awarded life imprisonment under Section 377 of the PPC (unnatural offence-whoever voluntarily has carnal intercourse against the order of nature with any man, woman or animal) with an additional fine of Rs1 million.

Imran Ali was also awarded 7-year imprisonment under Section 201 of the PPC (causing disappearance of evidence of offence, or giving false information to screen offender) along with a fine of Rs100,000.

“In light of forensic evidence, the DNA reports, photographic test and medical evidence, the court is of the firm view that prosecution has successfully established its case through its own evidence against the accused beyond any shadow of doubt,” the 85-page ATC order said.

Zainab Amin was abducted on January 4 from near her aunt’s house in Kasur. Her body was recovered from a heap of garbage near her house five days later, sparking widespread protests in which two people also died because of the police firing.

The police later collected DNA samples of 1,187 people from January 12 to January 23 to trace the accused.  On January 23, the police arrested Imran Ali, a neighbour of Zainab, as his DNA matched not only with the DNA samples collected from the body of Zainab but also at least 7 other victims.

On January 24, the accused was presented before the ATC which remanded him for four days in the custody of a joint investigation team (JIT). A polygraph test of the accused was also conducted which established his involvement in the murder.

On January 25, the LHC’s then chief justice Mansoor Ali Shah ordered that his trial must conclude within seven-days. On February 6, the accused was sent on a three-day physical remand for allegedly raping and murdering seven other children.

Zainab murder case: Prime suspect’s counsel decides to back out

On February 10, the court handed over copies of the challan to the accused counsel in a hearing which was held in Kot Lakhpat jail and February 12 was fixed for framing of charges.

On February 12, the judge asked the accused whether he accepts the charges levelled against him in the challan. The accused refused to accept the charges after which the court indicted him in the case and started regular trial proceedings.

Out of total 56 prosecution witnesses, statements of 32  were recorded and cross-examined while the rest were given up. The high-powered JIT also submitted its 175-page findings report before the ATC.

During the trial inside the jail, the judge Sajjad Ahmed asked the convict several times if there was any pressure on him and that he could talk to the judge if he wanted to say something. At one time, the convict told the judge he was ashamed of his acts and now he wanted to become a good citizen if he was granted an opportunity to go scot-free.

The most important aspect of this case is that defence did not challenge the material evidence nor could bring anything on file which could suggest false implication of accused Imran Ali.

Expressing satisfaction over the verdict, the victim’s family has demanded public execution of the convict. Speaking to reporters in Kasur on Saturday, Zainab’s mother said the court had handed down a just and right punishment to the rapist and murderer of her child.

Zainab’s uncle thanked the media for supporting the family and highlighting the issue. Expressing satisfaction over the court verdict, he said the convict must be hanged in front of public ‘so the whole world could watch’.

Journalism should be taught in colleges: parliamentarians