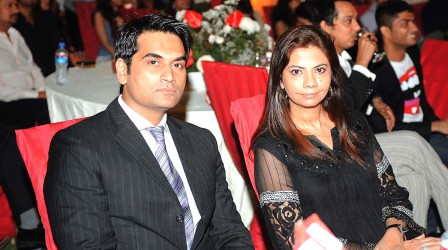 Humayun saeed has enjoyed a successful career as a tv actor and producer but wants to make a proper headway into films. PHOTO: FAISAL FAROOQUI

KARACHI: Prominent television actor Humayun Saeed is busy with his production house Six Sigma and is currently working on producing a new film.

Shagufta Rafique who wrote the script for Bollywood film Jannat aur Awarapun, has written the script and will be the female director for the film. The film will reportedly feature Pakistani star Meera in the female lead and will be shot in Karachi.

A popular television actor, Saeed made his first foray into films with Samina Peerzada’s directorial debut Inteha (1999), where he played the role of an obsessive lover. The film starred Meera, Resham and Zeeshan Sikander and was a commercial success. However, his second film No Paisa No Problem did not do well and flopped at the box office.

Saeed tried his hand at other films but reverted back to television and has enjoyed a successful run for the past decade as an actor and a producer. Saeed was last seen in the film Jashnn (2009), which was produced by Mahesh Bhatt. The film bombed at the Indian box office, but critics said Saeed was the film’s saving grace. Jashnn did not have a proper cinema release in Pakistan, with the DHA cinema in Lahore reportedly taking it off the screens after barely 100 people showed up to see the film. A premiere for media personnel and actors did have Mahesh Bhatt in attendance.

Mahesh Bhatt, has been a champion of Indo-Pak film collaborations and was the one who introduced Atif Aslam to the world of Bollywood playback singing. His next production stars Pakistani actor Mona Lisa.

In January this year, Saeed told Bollywood Hungama’s Taran Adarsh that he was teaming up with Mahesh Bhatt to do a film that would feature both Pakistani and Indian talent.

Adarsh reported that the film, titled Balla, will be produced by Shahzad Naseeb and Saeed’s wife Sameena, and again it was Rafique who was to write the script and direct the film. As far as the casting goes, Saeed said that he would play the lead role while “talks are on with Pakistani actors Iman Ali and Juggan Kazim.”

Saeed also said that Rafique is trying to get Indian actor Tabu on board for the lead role.