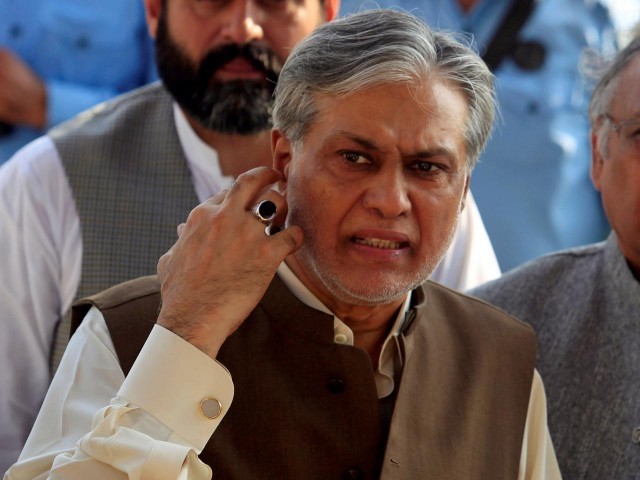 ISLAMABAD  : An accountability court on Wednesday allowed the National Accountability Bureau (NAB) to file a supplementary reference against former finance minister Ishaq Dar after the bureau informed the court that new incriminating material has surfaced against him.

In the application, the prosecutor said that filing of the supplementary reference has been duly recommended for approval by the regional bureau and it is under process of approval of the NAB chairman.

The court, which has already declared Dar as proclaimed offender, is recording evidence in his absence.

Twenty-eight prosecution witnesses out of 30 have so far recorded their statements before the court in the interim reference against Dar.

Shafique informed the court that the prosecution aims “to bring on record the entire incriminating material through the supplementary reference”.

He said if prosecution is not allowed the opportunity to file the supplementary reference, “the evidence and material collected so far is likely to be hampered and the prosecution would be bound to suffer”.

He prayed the court to allow an opportunity to file the supplementary reference. The court accepted the request.

The court would now resume hearing on February 23.

Meanwhile, the court dismissed a petition filed by the former finance minister through which he raised several objections over earlier court orders, freezing his assets in the NAB reference accusing Dar of amassing assets beyond known sources of income.

Dar through his counsel Qausain Faisal Mufti had raised objections on the court orders confirming freezing of his assets on the NAB’s request. In his arguments, the counsel said that his client was not given proper opportunity of defence.

Mufti had maintained that Dar requested the court to continue his trial through a pleader because he was unable to attend the proceeding due to his ailment, but the prosecution opposed it, saying a single accused could not be given exemption from personal hearing.

In addition, Mufti had maintained that the court couldn’t indict an accused in less than seven days after supplying copies to him, but in Dar’s case, he was given less than 48 hours before being indicted in the reference.

Moreover, he had raised objection over the reduction of proclamation period from 30 days to 10 days. Mufti had termed the freezing process illegal and prayed the court defreeze the assets.

Shafique had said that Section 12 enables the NAB chairman to pass an order to freeze assets as and when required. He prayed the court pass order for confirmation of the ‘freezing order’ of NAB.

Subsequently, the court had passed the confirmation orders and, later, Dar through his counsel raised objections on the orders.

The court had confirmed freezing of assets, properties, bank accounts and investments of Dar in Pakistan and abroad except an account with the Accountant General of Pakistan Revenue (AGPR).