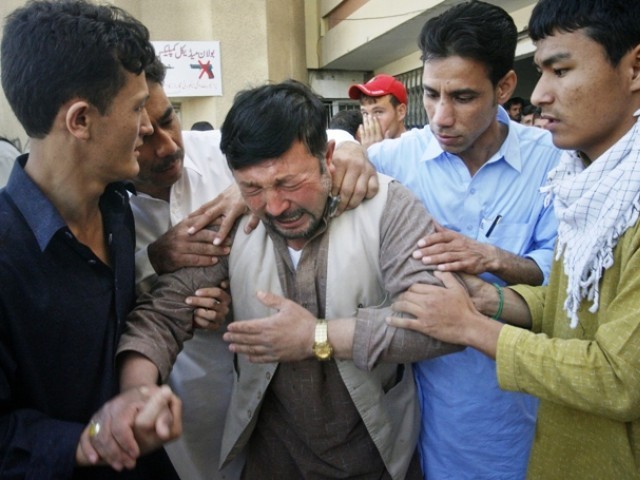 A man is comforted by community members, after he arrived to the local hospital in Quetta to find a family member shot dead, May 6, 2011. PHOTO: REUTERS

The chapters telling the story of violence in Balochistan, written out on the sands of the province, seem to be growing longer and longer with each passing day. They tell a tragic story of growing chaos and of killings based on motives that range from the nationalist to the criminal, with many shades in between. Sadly, unlike most marks made in sand, these are not so easy to wipe out and have coloured the province a deeper and deeper shade of red, as spilled blood continues to seep deep into its hungry soil.

The latest attack seems, at first sight, to be sectarian in nature — though it may be too early to rule out an ethnic motive. Eight members of the Shia Hazara community, gathered at a graveyard on the morning of May 6, were killed and some 15 others injured when unknown assailants drove up in two cars and fired rockets at them. This was followed by a volley of gunfire as bodies tumbled to the ground amidst the graves. The attack took place in a predominantly Shia area of Quetta. Across the province, attacks on both sectarian and ethnic lines have taken place before. There have been no claims of responsibility, but it seems likely extremist forces were behind the killing, carried out with deadly precision and an obvious element of prior planning.

The extent to which the once laughing city of Quetta has changed tells us, in a nutshell, much about Pakistan. Into the early days of independence, relatively cosmopolitan Quetta enjoyed a reputation as a glittering urban centre where entertainment flourished. Today, grime and dust have taken away the city’s sheen, marking the transformation of Quetta in more ways than one, turning it into a place where militants of many different kinds brandish arms and where no one feels entirely safe. Will it ever recover its lost identity and its abandoned gaiety? We do not know — but as more weeping households receive the bodies of those they loved, there appears tragically to be no sign of this.

The dangers of jirgas