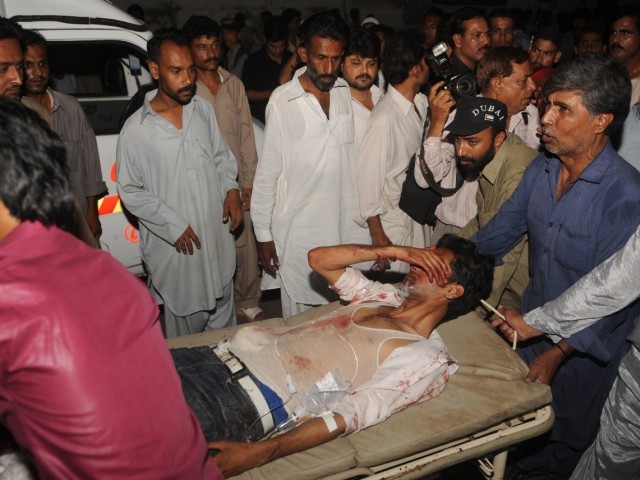 Volunteers shift injured grenade attack victims at a hospital in Karachi on May 6, 2011. PHOTO: AFP

At least three people were said to be killed and around 21 others injured in Lyari after unidentified men on a motorcycle hurled a hand grenade in Chakiwara late Friday night. There was confusion, however, with the chief of police Saud Mirza saying one death was confirmed. DIG Iqbal Mehmood had earlier put the number at three. Thus, the police were not entirely helpful with details.

The explosion was so powerful that people ducked for shelter and windowpanes were shattered. Witnesses said that a gambling club was targeted in Jhatpat market that falls in the jurisdiction of Chakiwara police station, but police said that the grenade was hurled at the defunct Peoples Amn Committee members who were sitting at a teashop.

The Rangers and police swooped in and cordoned off the entire locality. A bomb disposal squad arrived to collect evidence. Work was hampered by a blackout. People who were injured were taken to Civil hospital where their relatives rampaged the emergency ward. The crowd claimed that they rioted over the shortage of doctors and paramedical staff. There were reports that they attacked doctors present. Rangers and police were called in here as well.

Former PAC president Shahidur Rehman claimed that at least four people were killed in the attack, adding that all the victims were their party’s workers.

Lyari SP Javed Baloch told The Express Tribune that the attack was not on a gambling den. At least four armed men on two motorcycles hurled a locally made hand grenade at activists of the defunct Peoples Amn Committee at Al Fateh hotel in Chakiwara No. 2. He said that he had no information about anyone dying but that seven people were wounded and others had minor injuries. “I also heard about three killings through the media and checked all hospitals but I have no confirmation,” he explained. “I think the culprits wanted to target PAC chief Uzair Baloch as his house is close to the site.” He said that the case was being registered against Lyari’s prominent gangster Arshad Pappu’s brother Sher Mohammad and his accomplices.

Civil hospital MLO Dr Lala Mubarak told The Express Tribune that only four injured people with critical injuries were admitted while the rest went to Jinnah hospital. He said that unofficially he had heard about six killings.

On the other hand, JPMC emergency incharge Dr Seemin Jamali said that no body had been brought to her hospital but they had taken in 19 injured people.

The governor and chief minister condemned the attack and ordered an inquiry. The CM also ordered Inspector General of Police Fayyaz Leghari to close all gambling dens in the city and arrest their owners and caretakers  and report to him in two days.

This was the second such attack in Lyari in two weeks.