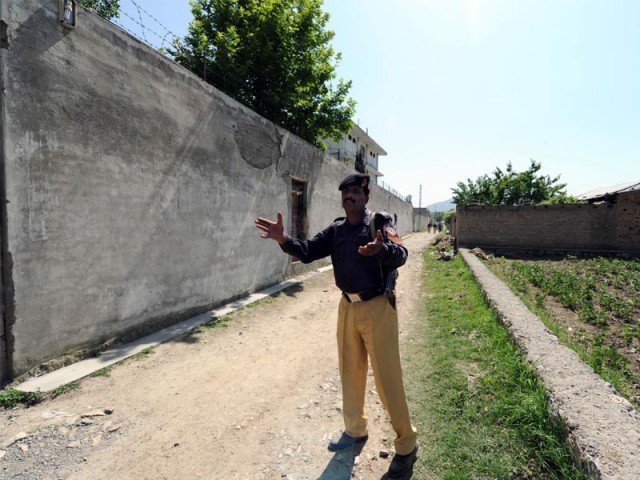 A Pakistani policeman attempts to stop the media outside the building which served as a hideout to Al-Qaeda leader Osama bin Laden PHOTO:AFP

Chairman of the Senate Armed Services Committee, Senator Carl Levin in an interview with ABC News has said that he believes senior Pakistani officials knew Osama Bin Laden’s location. He added that he had “no doubt” they know the location of other top terrorists, including Taliban leader Mullah Omar.

Levin said Mullah Omar was living in Pakistan along with leaders of the Haqqani network.

Levin stated this in an interview for ABC’s “Subway Series” With Jonathan Karl. During the interview, Levin added that he could not back this statement with proof, but reflected that he “could not imagine how someone higher up didn’t know it.”

The Senate Armed Services Committee has started a preliminary investigation into Pakistan’s involvement and may hold public hearings based on the results, Levin added.

Earlier, CIA chief Leon Panetta had stated that the CIA kept Islamabad out of the loop on the operation fearing that it could jeopardise the Abbottabad operation and “might alert the targets.”

Britain and France in unison also doubted Pakistan’s version that its intelligence agencies had no knowledge of the  al Qaeda kingpin living in undetected luxury, right under the nose of the prestigious military training academy.