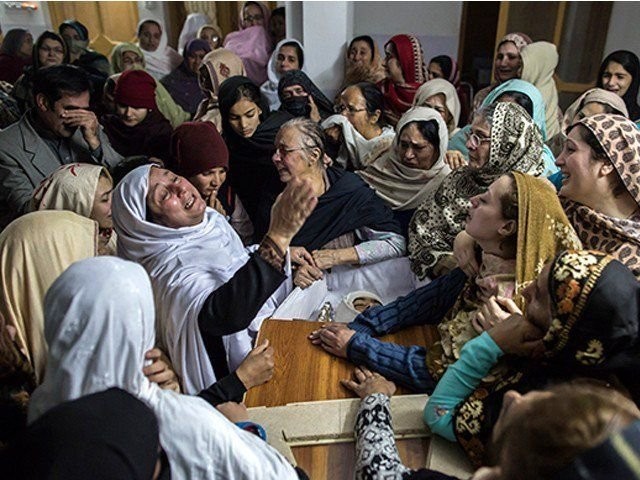 Women mourn their relative Mohammed Ali Khan, 15, a student who was killed during an attack by Taliban gunmen on the Army Public School, at his house in Peshawar December 16, 2014. PHOTO: REUTERS/FILE

PESHAWAR: Siding with demands of aggrieved parents, the Peshawar High Court has directed the provincial government to make public the measures taken by the police to investigate the attack on the Army Public School.

However, the court turned down a request by the petitioners for forming a judicial commission to probe the attack, noting that it was not the domain of the high court to direct the Khyber-Pakhtunkhwa government to form such a commission.

On Thursday, a two-judge bench of the Peshawar High Court (PHC) comprising Chief Justice Yahya Afridi and Justice Syed Afsar Shah heard a writ petition filed by Ajun Khan, the father of a student who had lost his life in the December 16, 2014, attack on the Army Public School (APS) in which over 140 students and staff were killed by terrorists.

Having received no response from the government, Ajun had moved the court, urging it to direct the government to constitute a judicial commission to probe the APS attack and to make public details of investigations thus far.

The court had disposed of the petition after Muhammad Fazil, an inspector in the Counter Terrorism Department (CTD) of K-P police and the officer tasked with investigating the APS case, appeared before the court along with a record of investigations so far.

“They have brought the entire record of the investigation, what else do you want now?” Justice Afridi asked the petitioner as he disposed of the petition.

Ajun, though, urged the court to direct the government to form a judicial commission to investigate the APS tragedy.

However, the request was turned down citing jurisdiction. “Under the law, forming a judicial commission is the prerogative of the provincial government and not of the high court,” explained Justice Afridi.

Noting the disappointment writ large on Ajun’s face, Justice Afridi agreed to forward the petitioner’s request for a judicial commission to the relevant officials in the provincial government for their consideration.

Under ‘The Commissions of Inquiry Act-1956’ the provincial or the federal government has the jurisdiction to form a judicial commission.

Noting that when the provincial government had taken all the right steps and have even managed to secure convictions of suspects, the court asked why was the report kept hidden.

“Why is the record not open for public?” Justice Afridi asked, adding, “The public wants to know what steps have the government taken to ensure justice.”

At this, the petitioner reminded the court that he had been asking for the record for a long time, but the government had not provided him with any information. He added that a request had been filed for the record under the provincial right to information law, but it was rejected on the pretext that the information was of a sensitive nature and cannot be provided.

During the hearing, government officials repeated this and explained to the court that under the law, they cannot provide the entire record of the investigation to the public and the petitioner can only have a look it at.

“You are a public functionary, you have to inform the public about the steps you have taken to ensure justice,” the court observed, adding, certain facts can be divulged such as how much time have the security forces taken in the investigation, who has been arrested, who was prosecuted for the deadly attack on the school.

“We are not asking you to hand over the entire record of the investigation but you cannot deny to the public [information] who want to know about the steps taken and their consequences,” the court directed.